Removing the roof from the glorious Ferrari F430 Berlinetta isn't sacrilege, it's inspired 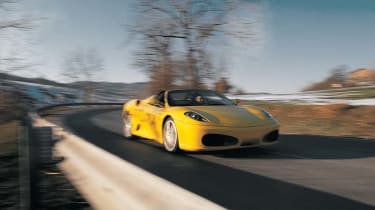 The warm sun is gently baking my brow, the air- flow is barely ruffling my hair and photographer Kenny P and I are enjoying the sound of the Ferrari F430 Spider's 32-valve, eight cylinder hi-fi. It sounds like a leisurely moment encapsulating the appeal of open-top motoring but right now the F430 is hauling hard at over 150mph. I'm impressed at how utterly stable and composed the F430 is and amazed at the calmness of the air in the cockpit. Conversation would be possible if the V8 behind us wasn't howling full bore, sending the needles of the speedo and rev counter ever further round their dials. Until now, I've taken a hard line on convertible supercars, arguing that decapitating a perfectly good coupe makes no sense. Drop-tops are heavier because of the strengthening required to compensate for the lack of a roof, and even with extra bracing their structural integrity is inevitably reduced, compromising handling precision. On top of that, with the hood down you get blown about and hood up they're noisier. The F430 Spider blows most of my objections clean away in its carefully managed slipstream. Yes, it's heavier than the F430 Berlinetta, by about 85kg, and yes, with the fabric roof raised there's a rustle of wind noise from its leading edges at speed, but neither detracts appreciably from the F430 experience. I haven't driven the Berlinetta F430 but within a few miles I know that the Spider is an improvement over the 360, even the Challenge Stradale. Compared with the 360 Spider, the F430 claims 10 per cent greater torsional rigidity and 5 per cent greater resistance to bending for a weight penalty of about 70kg, some 45kg of which is accounted for by the difference between 360 and F430 Berlinettas. Its aerodynamics have been tuned to emulate those of the coupe as closely as possible, resulting in greater stabilising downforce at speed, hood up or down. Performance is on a par with the regular F430 too, with a 0-62mph time of 4.1sec, just a tenth down, and a top speed of 'over 193mph' compared with 'over 196mph'. These figures illustrate how effective the wind tunnel work has been and what an absolute corker of an engine the new 4.3-litre V8 is. Like the old 3.6, the new engine is highly tuned and high-revving, making 112bhp per litre and developing its 483bhp at 8500rpm, with 343lb ft at 5250rpm.

It's on display under a glass cover on the flat rear deck of the Spider, like some expensive novelty coffee table. Personally, I feel that the Spider looks busier and much less cohesive than the Berlinetta, the pronounced wing-top air-scoops standing proud and the high, chunky tail being more prominent. The fabric hood features vestigial buttresses and a plastic rear window and folds itself in half and disappears beneath the double-bubble hard tonneau in 20 seconds. A clear polycarbonate screen fills the gap between the steel roll hoops and contributes greatly to the stillness of the air in the cockpit at speed. There's no question that the F430 performs much more vigorously than the 360, its more generous delivery apparent right from the off. It's much less languid over the first couple of thousand rpm and even in sixth will pull with urgency from 1500rpm. The sound is wonderful and much more readily appreciated in the Spider. At low revs the note is deeper and more engaging than the 360's, starting as a smooth, fruity chug. Just before 4000rpm the note softens and fades and then resumes at 4500rpm when there's a distinct kick and ramping up of the torque. From here the engine really starts to pile on the pace, its bark becoming ever-more manic until at 7000rpm there's another kick and the V8 wails gloriously to the redline. To hear and feel this engine work its way from tickover to the limiter in fourth gear is a thrill I doubt you'd ever tire of. There's more to the F430 than a stunning engine, though. Immediately impressive is the ride quality. The adjustable dampers have three settings and around town the Spider is supple and absorbent, rounding off the worst pocks and ridges with aplomb. There's barely a hint of steering wheel shudder or rear-view mirror shake, suggesting near-coupe levels of structural rigidity. Like the Berlinetta, the Spider has the steering-wheel-mounted 'manettino', a little red anodised toggle switch that gives access to five distinct dynamic settings. It adjusts not only damper stiffness and the shift time of the F1 gearbox, but also the threshold at which the traction and stability control system intervenes and the characteristics of the electronically managed, hydraulically actuated E-Diff.

I'd love to describe how each setting of the manettino affects the Spider's behaviour but sadly the test route was generally dire, offering few chances to explore the dynamics. However, what was readily gleaned was that even in the standard setting the Spider is wonderfully composed, alert and grippy. Turn-in is sharp and clean without a hint of understeer and the steering is chunkily weighted, accurate and communicative. The Spider feels beautifully balanced and poised mid-corner and you have to be quite aggressive with the throttle to rouse the interest of the stability control system. It all feels very natural, almost effortless. The structure feels so torsionally stiff that you can probably take it as read that at the limit the Spider handles with all the alacrity of the Berlinetta. Select the Sport or Race mode and you have a sharper car beneath you and a faster gearshift at your fingertips. Hold the throttle flat and there's a thump as the next gear goes home but this latest iteration of the F1 system is the most polished I've yet encountered. The question isn't why you would want the Spider version of the F430 but why you wouldn't. Any dynamic degradation must be very small indeed, while you get to enjoy the sound of that brilliant new V8 in all its glory. As far as I can see the only objections are that the Spider is less handsome and costs an extra £10K. Ferrari is predicting that 55 per cent of F430s sold will be Spiders. I reckon that might be an underestimate.