Ferrari removes the roof from the Scuderia, all the better to enjoy its V8 soundtrack... 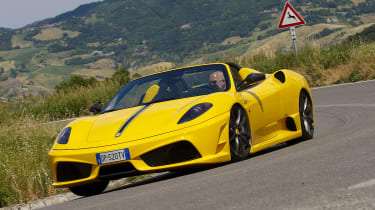 Don’t ask me what it’s like with the roof up. I have no idea. In fact I can barely tell you what it’s like with the side windows raised. All I can tell you is that the black canvas disappeared very neatly into a small space aft of the air deflector when we lowered it outside the famous brick archway in Maranello at 9 o’clock this morning, and unfurled itself with equal decorum in the same spot nine hours later.

Driving the Scuderia Spider 16M with the lid in place is not the done thing. Especially when you’re in the hills around Maranello and you’re conducting a fabulously orchestral V8 that’s intent on giving a command performance.

Such music defines Maranello – you can’t escape it. Chris Rutter and I had sat outside our hotel the previous evening, beer in hand, watching the thin clouds slide gently past and had our conversation punctuated frequently by a penetrating zap of revs, sometimes close, sometimes far away, signalling the passage of another prancing horse.

And now it’s our turn. Roof and camera gear are safely stowed, a few minutes’ familiarisation has reduced the intimidation factor of the barebones cockpit, a yelp of angry revs has signalled the engine’s first contribution and now we’re nosing left out of the gates.

So far, so good, and encouragingly easy. The Scuderia is not a particularly demanding car to drive. Leave the gearbox to juggle the clutch and shuffle the deck of cogs itself (something it does with real dexterity) and all you need to worry about is where you’re headed – south west for us.

Even with less than a couple of miles covered, I’m picking up on the car’s effortless athleticism and precision – a reassurance, even here, that the Scuderia Spider is with you come what may. The 16M part of the name? Just a bit of corporate willy-waving, a reference to Ferrari’s 16 world constructors’ titles.

And no, this version isn’t a half-hearted sop to European playboys, more Portofino than Fiorano. Underneath it carries exactly the same modifications as the hard-top Scuderia. Titanium springs, carbon body panels, bulkheads and door panels, the full engineer’s bling. At 1440kg, the most hardcore open Ferrari since the F50 is 80kg lighter than the standard F430 Spider and the 4.3-litre V8 boasts an extra 20bhp – and extra intake resonators to accentuate the noise.

For resonators read amplifiers. Whether they’re operating depends on the relative positions of the throttle, rev needle and Manettino dial, but a quick ankle-flex always seems to do the trick, the engine responding with a snap of acceleration, a spike of noise, silenced as soon as you lift off. Well, we’re not out of Maranello yet…

When we do eventually give the 503bhp all-aluminium engine its head, the result is utterly, totally, mesmerisingly visceral. Which may be  an over-used word, but it’s a glove-like fit for the Scuderia. The whole process is so dramatic, so shocking, so overwhelming, that the first time I nail the throttle, I instinctively lift off, unable to process the sensory bombardment. Yes, the acceleration is savage; yes, there’s intense pressure on your lower back; and yes, the LEDs nestling in the carbon steering wheel rim light up faster than a machine-gun burst. But it’s the noise that’s the killer, shockwaves of uncontained, unstoppable sound flooding in from behind. And what noise – a real nasally, waspish snort. Naturally it carries for miles. Every farmer we see in the fields seems to be leaning on a rake, awaiting our arrival.

So yes, the Scuderia Spider does a very good job of projecting its personality all over the sleepy, rumpled countryside – we’d expect nothing less from such a visually flamboyant, extrovert car. But here’s the thing – the shattering sound-waves may roll outwards over the landscape, but the car’s actual focus is inwards, on the driver.

And I’m having the time of my life, loving the roofless sensations, and amazed by the structural stiffness. Suspension control is absolute, whether you’re braking, turning, accelerating or merely rolling along. Not once all day, not even when we fail to slow in time for a set of unannounced roadworks and smack into a lateral gully and think we’ve flattened both front tyres, does the 16M lose its composure.

Yes, there is some body-roll in the cornering shots, but only because we switched the dampers to soft to make the Spider look like it was doing something. In Race mode all you feel is grip, poise, tenacity and the invisible tug of G-force on your body. The curiously shaped seats don’t permit much movement, but I still found myself sliding the chair forward a notch or two so I could better brace myself and maximise leverage on the meaty steering.

There’s nothing wrong with the helm’s weight or accuracy, but the chassis is the better communicator – I confess I had expected a gnat’s more feel through the steering, which just lacks the intimacy of a GT3’s. It still inspires confidence, though, and there’s no hint of edginess when I finally get brave enough to switch the stability system off and play with the throttle. It feels nicely balanced, the limits approachable, but I get the feeling there’s more in reserve and I know that real exploitation would require a track (preferably one with lax noise regulations).

Out here the Scuderia scythes along every road we travel, unflappable on turn-in (even when heavy on the stunningly powerful brakes), nailing every apex and exiting oh-so cleanly, traction and body control unshakeable. As good to drive as the hard top? Well it’s a second and a half slower around Fiorano, 90kg heavier and I don’t think it’s quite as alert, the handling not quite as nuanced.

But it’s close and that’s enough to ensure all 499 Scuderia Spiders have already been sold. However the best bit, the one abiding memory I’ll have of the 16M isn’t of the handling, but of the first time I uncorked that amazingly vocal engine. Glad I had the roof down.