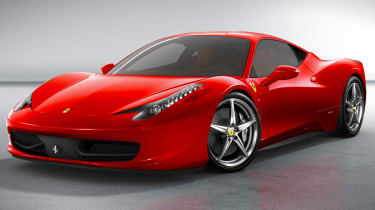 This is the all-new Ferrari. It's the new mid-engined V8 Prancing Horse, and will replace the F430 and Scuderia early in 2010.

And the 458 Italia is a completely new car in all respects - the design is a big departure from its predecessors while there's a brand spanking new 4499cc eight-cylinder engine, with a flat-plane crank and direct injection. It delivers 562bhp at an utterly mad 9000rpm, while torque is 398lb ft at 6000rpm.

That’s compared to the F430’s 483bhp and 343lb ft and the Scuderia’s 503bhp and 347lb ft, making this a much sharper weapon in the war against the Lamborghini LP560-4. It weighs about the same as the Scud (30 kilos more, but this isn’t the stripped out version, remember), meaning there’s a much wilder 414bhp/ton power to weight ratio.

It’s going to be a technology fest, too, with E-Diff, F1-Trac and updated ABS fitted alongside a host of other tech that Ferrari will give more details of at the car’s big Frankfurt motor show reveal in September.

Aerodynamics will feature highly, though, something that can be seen by the various swoops, slats and openings in the styling. It certainly looks different to the F430, with Enzo inspired lines and some really dramatic detailing (note the smart front lights, triple exhausts and intricate rear diffuser) marking this out as one of the best looking modern Ferraris.

Interior-wise, things are equally as dramatic. Our first shot from inside the 458 exposes an all new dashboard design for Ferrari as well as a trick TFT display alongside the dials that shows how the different elements of the car are doing and letting you know if the tyres are up to temperature or not. Could be handy, that. Indicator and wiper stalks are absent, too, the functions moved to neat little buttons on the steering wheel.

The 458 Italia sees a return to Ferrari's traditional naming cullture - the 45 coming from the engine's 4.5-litre displacement, the 8 signifying the cylinder count. Keep your eyes on evo.co.uk for more updates on the all-new Ferrari V8 supercar.