Fresh from the factory, we drive a Ferrari California out onto the roads around Maranello 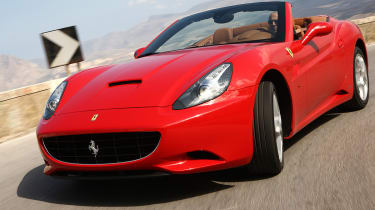 When the California debuted at last year’s Paris show, it was greeted with more than a little scepticism. Purity of purpose is what people expect from a Ferrari, so it was perhaps unsurprising that news of a multi-tasking, all-things-to-all-men (and women), sports-car-cum-GT-cum-retractable-hardtop-convertible with retro leanings and a recycled name was met with suspicion.

Some people claimed that being a front-engined V8 – unprecedented in Ferrari’s 63-year history – the California started out as a Maserati project that became too expensive but was too far advanced to can. Some said that with its portly kerb weight and refined double-clutch transmission it was a shameless sop to the US market and that 453bhp (30 fewer than in the F430) wasn’t enough. Some, perhaps unwisely, suggested that a Ferrari designed to attract women drivers (a projected 50 per cent of sales) was simply an oxymoron that should have been strangled at birth. And some called it Ugly Betty.

But all that was before they got up close and personal. I’m standing more or less beneath the window of Enzo Ferrari’s old office in the car park of Ferrari’s iconic main entrance from where he could keep an eye on the gatehouse activity and would have been able to see our Ferrari for the day. Wonder what he’d have thought. This is the first time I’ve had a really good look at the California and while there’s no refuting the charges that the rear is bulky and the Coke-bottle-kick swage-line on the doors is corny and overdone, the result is almost inexplicably great: cinematically cool, Ferrari to the core.

Inside, the subtle retro theming is just as evocative, especially the optional Daytona-style seats, lavishly cowled instrument binnacle and circular face-level vents. A classy flourish is the big yellow centre-display rev-counter and, just to be sure all your senses get a workout, the beautifully tactile fillet of aluminium on the centre console that houses the buttons for the launch control, the transmission’s auto mode, the electronic handbrake and the electric windows is unnecessarily gorgeous. The big multi-function touchscreen display bang in the middle of the dash isn’t, even if its aluminium framing has more or less the same hue and sheen as the steering wheel boss flanges that put the engine start button and simplified manettino (just three drive modes – comfort, sport and stability control off) within easy reach. In fact, the cabin’s pretty wonderful: chamois glove snug, extremely comfortable, easy to see out of and blessed with a terrific driving position.

Hardtop retracted (fast, slick, oddly Germanic) the California sounds much more masculine than it looks, the double-speed whirr of the starter igniting an instant bark of high- compression, light-flywheeled combustion, followed by a few seconds of drain-pipey resonance calming to that uniquely clean, flat baritone idle you only get with a flat-plane- cranked V8.

No, it isn’t quite the same engine as the F430’s. The basic architecture is very similar but the California’s direct injection allows a higher compression ratio and it has a wider bore and shorter stroke, displacing 4297cc rather than the 4308cc of the F430. What people couldn’t work out at the California’s launch was how Ferrari could claim a sub-4 second 0-62mph time for the 275kg heavier, front-engined car, making it slightly quicker over the benchmark sprint than its mid-engined stablemate.

The claim is still unsubstantiated of course but you swiftly sense that the combination of the California engine’s extra torque and the dazzling speed and responsiveness of the seven-speed double clutch transmission – a Scuderia’s F1 paddleshift truly seems slightly tardy by comparison – just might do the business. Added to which it has a launch control. Whatever the truth, it feels assertively rapid and would well and truly put an M5 in its place.       In fact, if the factory claims stack up, the Ferrari accelerates with a sustained intensity to which few cars would be able to find an honest answer, covering the standing quarter-mile in a fraction over 12 seconds on the way to its 193mph top speed. No chance of that today but just playing the engine via the paddles is addictive enough, especially when you take it all the way to the 8000rpm limit and hear the crack of what sounds like small arms fire on the upshift. Few engines sound as lean, hard and malicious as this one when stoked. In the beginning it’s all about noise. Noise that makes the small hairs on the back of your neck tingle. Noise that gives onlookers their initial close encounter with cars of the fast kind. And, in the case of the California, the sonic signature is more heart-stopping than the shape that owns it. In the best cases, sight and sound meld perfectly (as in the case of the 430 Scuderia and the 360 Challenge Stradale before it). But the California sounds a lot tougher than it looks. People turn round when they hear it coming then stare straight through it, unable to match the bone-crunching ferral howl with the comparatively demure presence from the front.   As well as being faster than it has any real right to be, the California is also the owner of a formidably well-sorted chassis and extremely stiff body structure that doesn’t flex, shimmy or shake, however rough the road surface. With the suspension on its comfort setting, the ride is remarkably pliant and forgiving, smothering ruts and dips with unprecedented equanimity for a Ferrari. The handling is fluent and composed but with noticeable body-roll and gently cushioned responses to the helm. It’s more compatible with the GT side of the California’s character, along with the impressively low levels of wind noise with the roof up (and lack of buffeting with it down) and the way the engine quietens down to an ambient murmur on a light throttle load.

Engage the Sport button, though, and the California sharpens up its act significantly. The high cornering forces it’s capable of are conducted by steering that, once it sheds its initial low-speed deadness, becomes beautifully weighted and scalpel-sharp. Although still quite softly sprung by F430 standards, there’s something palpably correct about its chassis dynamics: the reassuring immediacy of its responses, the fine ride – firm yet unerringly supple – the way it feels lighter than it is and closely-coupled to the road. And the standard ceramic brakes are every bit as mighty as you might hope and more progressive at the pedal than some rival systems.

True, the California never quite feels as nimble and lithe as an F430 Spider. Its steering doesn’t seem to resolve quite as much information from the road’s surface or respond as precisely or swiftly to small, line-trimming inputs. The conversion of power into motion is nevertheless pure, unsullied and rich with sensation. Lots if you turn the manettino to its off position. As with the 599 GTB Fiorano, the opportunity afforded by a powerful, front-mounted engine driving to the rear wheels isn’t denied…

Fact is, the California does hold up as a real, red-blooded Ferrari, and quite magnificently. There are areas in which it almost beats the German opposition at its own game: ease of driving, comfort, cruising refinement and that 14-second retracting roof. In others its advantage is crushing and complete: style, presence, interior ambience, drivetrain charisma, sound and – harder to define, this, but no less real – an aura that makes your skin prickle as you walk up to it. It might be a Ferrari that seeks to cover all the bases but it’s still capable of delivering rare thrills to whoever’s behind the wheel. You don’t have to be Michael Schumacher but, apparently, we do have him to thank for nailing the balance between ease of driving and all-out thrills.

Plenty of fast cars capture the moment. This is one of them. Far fewer possess the breadth of repertoire to make the moment last. Perhaps that’s the California’s greatest achievement.