We put the Ferrari California roadster through a full performance test, on UK roads and track 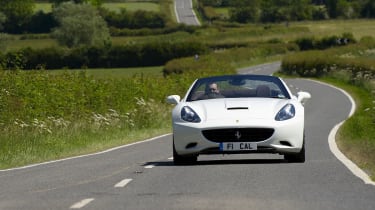 Is the California a ‘real’ Ferrari? It certainly takes the company into new territory, being its first front-engined V8, its first car with a folding hardtop and its first with a twin-clutch gearbox. The all-things-to-all-people brief looks a stretch, yet so far we’ve been impressed. Slightly surprised too, if we’re honest, because we doubted that the California could be a comfortable, easy-going GT yet also unmistakably a Ferrari. Until now, however, two questions have remained unanswered, namely can the California live up to its ambitious-looking performance claims – including 0-62mph in less than 4sec – and does its chassis set-up work on UK roads? This is where we find out.

We’ve driven some of our favourite lanes and A-roads, visited the Millbrook Proving Ground for straight-line performance tests and the West Circuit at the Bedford Autodrome to set a lap time. We also popped both Californias onto our corner-weight scales. Both? As ever with Ferrari, it’s a test of two halves; the figures taken on an Italian car attended by Italian technicians, the on-road impressions formed from the UK press car, here fresh from its pre-delivery preparation and just run-in. Once again, the California sprang a few surprises, most of them good.

The first is that the press car’s colour scheme of Bianco Avus and Cioccolata works, given time, although initially it’s a little overwhelming being surrounded by so much Dairy Milk hide. The optional ‘Daytona’ seats appear to be comfort-spec but offer good support in cornering, while the driving position is spot-on and all-round visibility good. The rear seats, beautifully crafted though they are, are largely ornamental.

The California’s chassis copes brilliantly with broken urban asphalt while its instantly impressive twin-clutch gearbox inconspicuously finds the right gear in auto mode, delivering serene progress. Twisting the manettino to ‘Sport’ ups the keenness to shift, and the ‘+’ and ‘-’ paddles make manual gearchanges simple, while their long fingers make them easy to find wherever your hands are on the wheel.

Out on fast, flowing sections of road, the California feels supple, poised and accurate, yet it’s quickly clear that it’s an interesting proposition on challenging UK tarmac. There’s clearly a desire for the suspension to soak up the worst of a road, yet at the same time to feel crisp and responsive, like a Ferrari should. The result is a car with suspension that can feel a little busy in a straight line because it has stiff dampers, but which then falls over a bit in the corners because it has soft springs and anti-roll bars. Switching from Comfort to Sport on this MagneRide-equipped car tightens things up a bit, trimming some of the ‘float’ and introducing a slightly busier feel at the treadblocks, but still the big-bump control is relaxed and roll in corners is generous. As we reported from the original launch (evo 125), the fixed damper set-up feels very similar, falling between MagneRide’s Comfort and Sport settings. We’d save the cash for other options.

Things get more interesting on bumpy back- roads. Here the California can feel rather odd in the corners, its rear a little remote, as if the car is floating laterally. In the dry there’s no shortage of grip to keep it hooked into a turn and you learn to trust it, but it would probably be less reassuring in the wet. The steering should expose this rear-end remoteness more, but it’s surprisingly light, and although it becomes less so as you pick up speed, this impression remains. Throw some lock on and there’s an almost over-eager response to your input, yet the car remains unflustered, and your lasting impression of the steering is that it’s clean, direct and detailed. This is especially impressive given how completely the front suspension takes the sting out of lateral ridges and the impact out of speed humps.

The California’s manettino offers fewer dynamic programs than those on other Ferraris but the stability control system (CST) is keen and subtle. Understeer will rear its head, but not when CST is engaged; get overambitious on entry and it gently nudges you back on line, initially by trimming the power, so all you feel is the engine going a little flat.

Switch CST out and you can drive through initial understeer into a whole world of oversteer. The generous amounts of give in the suspension make it feel a little imprecise when you make sharp inputs with steering and throttle, but it all turns out very well. The California will push its tail wide if provoked on the entry to a tight corner, and occasionally at the end of a longer corner when momentum and power finally overcome grip. In tighter turns you have plenty of time to gather your wits and the car, which is an intrinsic benefit of the front-engine/rear-drive layout.

What feels comfortable on the road can feel exaggerated on track, and it did seem as if the Italian test car would spend more time going sideways than forwards on the West Circuit. We had the BMW M3’s 1:25.9 lap time in mind as a yardstick because it too is front engined and rear drive, has a twin-clutch gearbox (in the car we lapped) and a similar power-to-weight ratio. The telling difference, we thought, would be tyres – quite extreme Michelin Pilot Sport Cups on the M3 compared with regular-looking Pirelli P Zeros on the California.

Ferrari’s own test driver put in a couple of moderate laps to check all was in order. It was clear on the sighting lap that CST was holding the car back, so it was turned off, even though it then became clear that on such a hot day the rear tyres might already be beyond their optimum temperature, the California getting well out of shape through the fast final turn on the first flying lap. Even so, a lap later, with a considerate right foot, the California was down to the M3’s time. As it had started with its tyres too hot we gave it a couple of cool-down laps before another flyer, which knocked the time down to an impressive 1:25 dead.

Such a lap time involves generous degrees of body roll, so much in fact that there were scuffing noises on a couple of the fastest corners – possibly an outside rear tyre meeting its wheelarch liner or an unidentified underbody component scuffing the asphalt. Getting the best out of the car was all about managing oversteer; getting as much power down as possible without allowing the tail to get too far out of line. Proving that there is no torque interruption with the twin-clutch gearbox, on one lap, halfway round the Bank hairpin with opposite lock balancing a slide, I upshifted from second to third without lifting and the slide continued exactly as before.

The set of part-worn tyres we’d started with were pretty much shot after our laps and a few more in the hands of the Ferrari test driver. This we thought unusual, but the UK test car confirmed that the tyres are quite soft – after our on-road cornering shots the same wear pattern was beginning to show. According to Pirelli, this specification of tyre, which is also fitted to a couple of other cars including a Lamborghini, has a high initial wear rate but then settles down.

Mind, the weight they carry is substantial – and more than expected. Ferrari claims a kerb weight of 1735kg for the California, but the Italian test car weighed in at 1786kg. A chunk of this is accounted for by the twin-clutch gearbox, which is perhaps 30kg heavier than the standard-fit six-speed manual (which it is generally agreed will be sold in tiny numbers). The white and chocolate car was heavier still at 1901kg, and it’s hard to see where all of the extra 115 kilos are. The main differences in spec amounted to the track car having carbon-shelled race-style front seats and a luggage shelf rather than rear seats, plus carbonfibre engine bay trim and a carbonfibre front splitter, while the road car had the fully electric Daytona-style leather seats, plus matching rears and full leather trim, and 20in rims rather than the stock 19s.

The California’s performance on Millbrook’s mile straight was even more impressive than its lap time: we recorded 0 to 60mph in a remarkable 3.8sec (consistent with Ferrari’s claim of 0-62mph in ‘less than 4sec’) with 100mph coming up in an equally gobsmacking 9sec dead.

How does the California manage it? The first thing is traction. The process begins with a test start to allow the launch-control program to ‘learn’ the surface. Foot on the brake, CST off, select first, press the ‘Launch’ button, nail the throttle until the revs steady, then quickly release the brake. There will be wheelspin. Bring the car to a halt and repeat, only this time there will be no wheelspin; the California digs deep, weight transfer (already 47:53 front:rear when static) sits its tail down, pressing its Pirellis into the road, and it lunges forward without a chirrup of slip. There’s nothing more to do then except steer straight and keep it nailed, because in launch mode it’s the gearbox that makes the upshifts, each perfectly timed and seamless, the acceleration feeling all the stronger for the lack of interruption.

The star of the show, probably the single most impressive feature of the car, is its seven-speed twin-clutch gearbox. It comes into its own on full-throttle changes, shaving fractions of a second and giving big, lip-smacking pops on each upshift. The inevitable, unavoidable conclusion is that Ferrari’s F1 gearbox, best of all the automated manuals, is obsolete.

The California’s in-gear times are strong too. The 4.3-litre, direct-injection V8 produces an impressive 453bhp, giving 105bhp per litre, but is tuned to deliver useful torque too. So while it revs to almost 8000rpm, it produces 358lb ft of torque, three-quarters of which is available from 2500rpm. And, with the help of seven ratios, it delivers a very consistent and punchy set of in-gear figures. It’s an engine that seems to get stronger as the revs rise, its note a clean, tight bark. Oddly, it seems just as loud with the roof up as down, and it’s a bit too noisy at times, drowning out the radio occasionally when you’re ambling.

So, is the California a ‘real’ Ferrari? Anyone expecting a focused drivers’ car will find the California rather soft initially, but give it a chance, get some miles under your belt, and you’ll find it strikes an effective balance between GT comfort and sports-car directness. Roused, the performance of its V8 is solid and energetic, and the refined twin-clutch gearbox manages it brilliantly. Push and you’ll find a car that is friendly, poised and exploitable. On the other hand, stow the roof, relax, and you’ll find the chassis cosseting and the seven-speeder equally adept at loafing. Yet you’re never in doubt that you’re driving a Ferrari. It’s a credit to the team that created and developed it that the California manages to be GT and sports car in one, and in some style. Even in white.