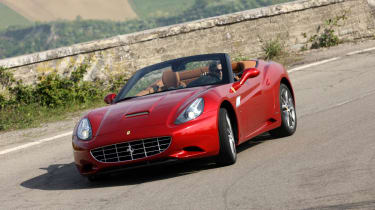 Almost three years on and Ferrari’s evolutionary product cycle means the California has received a thorough mid-life update that can be summarised thus: more power, less weight and sharper handling. In addition Ferrari has developed an optional ‘Handling Speciale’ pack, which features quicker steering and a more overtly sporting chassis set-up. Sounds like our kind of car.Technical highlights?

The most extensive revisions have been made to the California’s aluminium spaceframe. A weight saving of 30kg has been achieved with no loss of rigidity by careful analysis of the entire structure and the use of a dozen newly developed alloys, many of which come from the aerospace industry. At a smidge over 1700kg the Cali isn’t exactly anorexic, but compared to something like a new Bentley Conti GT or Merc SL it’s significantly lighter than its target rivals.

The 2012 California’s engine now pumps that little bit harder. Peak power is now 490bhp (up 37bhp) while peak torque also increases to 372lb ft, an increase of 14lb ft. These improvements have come from a new design of piston crown, improved mechanical efficiency thanks to a reed valve in the crankcase to evacuate oil and blow-by gasses, reduced backpressure from a redesigned 4-into-1 exhaust manifold and a reprogrammed ECU that exploits advances in the anti-knock properties of the latest petrol formulas.

The standard California has received some subtle chassis tweaks via reprogramming of the control software for the adaptive dampers. The dampers themselves are also new low-friction items, although the springs remain unchanged. The optional Handling Speciale pack (£4320 inc VAT) goes a step further, with quicker steering, stiffer spring rates (+15 per cent front, +11 per cent rear) and a bespoke software programme for the dampers. Geeks amongst you will like to know the quicker steering means a 9 per cent reduction in steering input, with the suspension changes reducing body roll by precisely 6.2 per cent. What’s it like to drive?

The regular car feels more together than the original version, with more controlled and cohesive damping. In Comfort mode the damping is supple, and switching to Sport tightens things up just enough to add a little more bite, but not so much as to stray too far from the California’s user-friendly brief. In the rain the stability control system is subtly effective, smoothing-off any spikes in traction with minimal interruption in forward motion.

With almost 500bhp at its disposal the California is a very rapid car, both in-gear and from a standstill – think 3.8sec to 60mph and sub-9sec to 100mph. In changeable conditions on very challenging roads its combination of well-balanced front-mid-engined chassis, responsive V8, punchy transmission and carbon brakes make a formidable combination.

Is the Handling Speciale option worthwhile? Well, it certainly feels more alive and urgent on twisting, turning roads. There’s a penalty in terms of ride comfort, but its still more than tolerable in Comfort mode and feels that little bit more agile and connected in Sport. The quicker steering really suits switchback corners, but on a faster and more flowing road it is a little too keen to react to small steering inputs, which sometimes means you take a few bites at a corner before you settle on the appropriate level of steering input.

The California feels a more convincing and satisfying car to drive hard in standard specification. The optional Handling Speciale kit goes a step further, adding a little more edge for those conquest customers who have perhaps been seduced away from their Aston V8 Vantage Roadster, AMG SL or Porsche 911 Turbo Cabrio. In short it’s a more convincing Ferrari.

Despite the raft of improvements the list price of the MY12 California remains unchanged. It’s also included in Ferrari’s impressive 7-year maintenance programme.