A £140,000 Ferrari F430, on a course carved from snow, with every corner taken sideways. Henry Catchpole discovers a trackday with a difference… 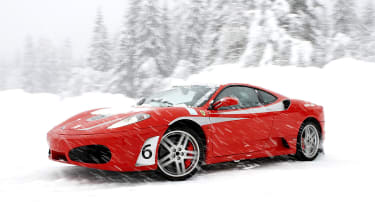 Winning a Euro Millions rollover. Snatching a world drivers’ championship on the last corner. Being invited to Cameron Diaz’s summer pool party. Driving Ferraris on ice in the Dolomites. Those sorts of things don’t really happen…

It’s like a winter wonderland as we walk through the trees. The sky is dark but billions of big, soft white flakes are falling slowly all around. The locals in Cortina say they have never seen snow like it. The huge drifts on either side of the path add a gentle white glow to the darkness. Up ahead there’s artificial light – industrial arc lamps – and sitting underneath, bathed in the megawatt brilliance, is a line of red (and now white) F430s with 3mm studs in their tyres. Pinch me. Actually don’t, just leave me dreaming.

This is the ultra exclusive ‘Pilota on Ice’ course, open only to those with one of Maranello’s finest in their garage. And me. I haven’t told any of the other five on the course what I do, so I’m sure some of them are wondering why a tramp born in the ’80s is with them. Still, they’re very polite, and to be fair I did collect a decent garage of Bburago model Ferraris when I was younger.

We have a briefing, which is mercifully brisk, split up into two groups of three and then meet our instructors. Andrea Piccini runs the Pilota courses at Fiorano, was an F1 test driver for Minardi and drove the 007 DBR9 at Le Mans last year. Thomas Kemenater has been world champion in the Ferrari Challenge twice and has the mischievous grinning eyes of someone who used to hurtle down the sides of mountains for the Italian downhill ski team.

The first time we get into the cars it’s in the passenger seat so that we can see where the icy special stage goes. As we wind through a labyrinth of oblique ice walls, Thomas explains that the first two laps will be done in ‘Snow’ mode and then ‘Race’ before the CST is turned off completely for the rest of our time here. The thick duvet of fresh snow means that the 350 studs in each of the back wheels and 300 in the fronts do precisely nothing to help grip; the rubber alone is having to provide what traction it can for the 483bhp. Once CST is off, sideways has never been easier.

Some of the F430s here have F1 transmissions, others are manuals. I’m sure some of Ferrari’s customers aren’t even aware that you can order an F430 with three pedals, so it probably comes as a bit of a shock when they get in and see the classic open gate, but the shift is gorgeous and in these conditions you appreciate the ever so slightly sharper throttle response too. The cars all have plaques reading ‘Officially tuned for Pilota Ferrari’ on their dashboards but the changes aren’t really extensive, with just a half cage being fitted and the suspension converted to rose joints (which accounts for the slight clanking in the front wheelarches).

The two other people in my group are Kostas, who has a Scuderia Spider 16M on order, and Steve, from Korea, who has just bought an F40, already has an F50 and loves his mk2 Clio V6. Steve is an ice-driving veteran, having done several courses, but he says this one is great for the amount of time you get in the cars and the fact you don’t have to go to the Arctic Circle. Even he admits that it’s a bit expensive, though, at an eye-watering 9600 euros…

It’s my turn to drive. I jump into the bucket seat, exchange pleasantries with Thomas and we’re waved out into the snowy night. As we wheelspin our way down the straight, dialling in correction all the way to the first corner, the butterflies open in the exhaust pipes, rending the night air with a melodious bark that I’m sure can be heard high in the mountains above. After my practice session with the equally mid-engined MGF earlier in the week I’m quickly at home in the F430, so I can just settle down to enjoying the bizarre experience of oversteering a Ferrari through a snowy maze. The steering is very light but the car is easy to catch. It’s imperative you stay away from the fresh snow at the edges of the track, however, otherwise it’ll seem as if the icy walls have locked tractor beams onto the red paintwork and you’ll be dragged inexorably into their cold embrace.

After an hour of sending rooster tails of snow into the air, looking out of the side windows, laughing and occasionally spinning, the track is changed. Now there’s a faster section at the end of the straight and it feels good to carry a bit more speed into a turn as you go sideways. The stakes are higher but the car feels more finely balanced, each end floating independently yet in unison across the surface. And then all too soon our night stages are over and a night’s sleep has never seemed less appealing.

THE NEXT MORNING is spent practising sideways skills, either in specific sections of the special stage where the walls aren’t quite so close, or on an open snow field where there are only cones to get in the way. Some things I inevitably know the fundamentals of already, but it’s never less than the best feeling in the world to hold a car sideways so I’m not exactly complaining about getting time to practice!

There are two things, however, that I will consciously take away from the course. The first is forcing myself to look further ahead than feels natural when I’m going sideways in the very tightest corners – you tend to instinctively look ahead through the open, quicker stuff, but in the hairpins you need to be almost looking through the snow banks and imagining where the track goes. The second thing is something that I’ve wanted to practice for a long, long time. The instructors refer to it as the pendulum effect, but you probably know it as the Scandinavian flick. Obviously, it’s something you only really need in rallying, but it is a lot of fun to be able to do nonetheless.

The basic idea is as follows. Approaching a long left-hander, say, you need to turn hard right before the corner. You then need to get the car oversteering (still going right) by giving it a bootful of throttle (this can also be achieved by trail braking as you turn right). You are now drifting with the nose pointing away from the corner you want to go round. At this point you want to stop the slide, so you back off the throttle sharply. As the grip returns to the rear the car will begin to pendulum back the other way. The natural reaction as the car begins to straighten would be to wind off the corrective lock, but instead you want to hold it on so that the car swings through the straight-ahead and starts to go the other way. Now you’ll (hopefully!) be sliding through the left-hand corner with the momentum, so you need to whip the wheel round quickly (you almost throw it round) and apply opposite lock as normal to hold the slide, picking up the throttle progressively to continue it. Easy peasy. Sort of.

My best drive comes after lunch, in the mock stage between the snow banks (which, to my mind, is more fun than the coned practice arena as it feeds my fantasies of competing in Rally Sweden). Whether it’s the stimulating effect of the violent little espresso I’ve just consumed or conversely the calm that comes with a full stomach, the driving just seems to flow. All the practice clicks and it’s never felt more natural to swing a car into a slide a long way before a corner and then just use momentum and throttle to guide it all the way round… and out of that corner… aaaaaand into the next… aaaand the next… aaaand the next…

Through a narrow left-right-left complex not only is the rear of the car penduluming inches from the ice walls but the front is also all but grazing the apex cones. My hands seem to be working the steering wheel much more calmly now too – no snatching, no panic, just smoothness. Only sitting back in the office, writing this, does it seem a crazy thing to be doing with a £140,000 Ferrari, but for those few laps I promise you it felt easy.

Oh, and the driving performance of the two days? Undoubtedly the bus driver who delivered us, in a blizzard, on a snow-covered mountain road, the 20km from the hotel to the circuit.