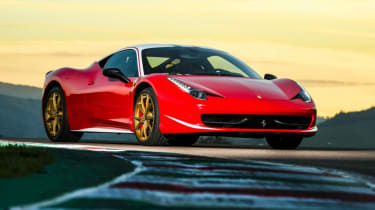 Ferrari’s ‘Tailor Made’ personalisation programme has been used to make a pretty special 458. The Niki Lauda 458 Italia isn’t owned by the man himself, but has been configured by a Ferrari buyer wanting to pay tribute to the legendary F1 driver.

Based on a standard 562bhp 458 Italia berlinetta, it is inspired by Lauda’s Ferrari F1 cars, the 1974 Ferrari 312 B3 in particular, its classic red paint complemented by gold alloy wheels and a while roof wearing the Italian tricolore stripes.

There are further white exterior flourishes, while those stripes continue inside, across the leather seats and through the centre console.

Lauda’s career has been brought back to the limelight thanks to the film Rush, which focuses on the rivalry between him and James Hunt. He raced in Formula 1 between 1971 and 1985, achieving 54 podiums and 25 race wins, with three world championships to his name.