Everything you need to know about the latest Ferrari convertible 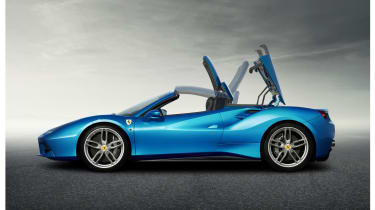 Ferrari has revealed more information and new images of the 488 Spider at the Frankfurt Motor Show. Powered by the same twin-turbocharged 3.9-litre V8 as the 488 GTB, Ferrari claims that the Spider offers almost completely uncompromised performance despite swapping a fixed roof for a reclining hard top.

The Spider utilises the same 3902cc, twin-turbocharged V8 as its closed-roof counterpart. This develops a maximum output of 661bhp at 8000rpm, and a 560lb ft wallop of torque.

It loses little to the GTB in terms of performance. Despite the addition of electronic folding roof, the Spider weighs just 50kg more at 1525kg, ensuring power-to-weight is only 15bhp down on the coupe at 440bhp/ton. This enables the Spider to accelerate from 0 to 62mph in a claimed 3.0sec, matching the GTB and beating the newly-unveiled Lamborghini Huracan LP 610-4 Spyder by four tenths.

Ferrari quotes 0-124mph acceleration of 8.7sec, four tenths shy of the time quoted for the coupe and only one-tenth behind the time set by the extreme Lamborghini Aventador LP750-4 SV. The Huracan Spyder achieves the same goal in 10.2sec. Like the GTB, Ferrari also claims throttle response of 0.8sec at 2000rpm in third gear – an indication of Ferrari’s desire to keep turbo lag to a minimum. 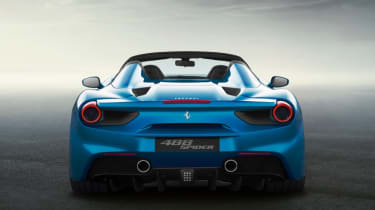 Ferrari says the 488 Spider’s folding hardtop can fully retract or deploy completely in 14 seconds – again stealing a march on the Huracan Spyder, which drops its top in 17 seconds. It overlaps into two sections and folds flat just ahead of the engine compartment, just like the roof of the 458 Spider and Speciale Aperta. Occupying only 100 litres of space – compared to the 150-200 litres of a conventional hard top – the new roof ensures the car’s lines and aerodynamics aren’t disrupted.

An electric glass rear window can also be independently lowered or raised through three positions, helping to reduce buffeting from the rear when the roof is down, or allowing just the rear to be opened when the roof is up.

To help reduce the drag created by the Spider’s roofless shape, Ferrari’s aerodynamicists have created a bespoke engine cover flanked by two buttresses. The carmaker claims that its design team completely reworked the aesthetics of this region of the Spider compared with the GTB.

Underneath, the Spider features the GTB’s vortex generators, which reduce pressure and therefore suck the car towards the asphalt without increasing drag. A computer-controlled flap in the rear diffuser also helps adjust the car’s drag and downforce attributes, according to whether the car is cornering and braking, or accelerating. 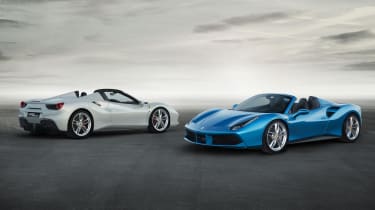 Weight gain is minimised thanks to the 488 Spider’s spaceframe chassis, which uses 11 different aluminium alloys combined with magnesium and other lightweight materials.

With this construction, Ferrari promises that the chassis has the same torsional rigidity as the coupe, making it 23 per cent stiffer than the 458 Spider. This suggests that even with the roof down, the 488 Spider could be as pointy as its hardtop equivalent – a car that itself felt as agile and adjustable as the 458 Speciale.

Normally we wouldn’t get too excited about on-paper numbers – actually driving a car can often reveal that despite its manufacturer’s best promises, the numbers don't quite translate onto the road. But with the memory of the open-top 458 Speciale Aperta and its supreme agility, increased visceral thrills and seemingly uncompromised performance still so fresh in our minds, we’re intrigued to see what an open-top does to the 488.

In fact, losing its roof might be exactly what the 488 needs for us to truly fall for its turbocharged engine. Because despite its sheer performance, Ferrari hasn’t been able to completely hide the fact the V8 recycles its exhaust gasses - Jethro Bovingdon confirms: ‘the revs don’t chase around the dial like they would in a 458…[there’s less of] that feral rush to 9000rpm’ (evo 211). With the roof down, however, the increased exposure might help improve the new unit’s slightly dulled tone. 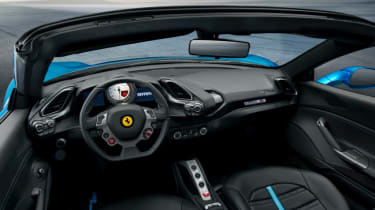 The Spider will also feature the GTB’s second-gen Side Slip Angle Control system (SSC2), and as such, we’re expecting it to be equally as playful around the limit. But while on paper the 488 GTB creates a new benchmark for its class, will it be the Spider that injects the heart it needs to match its more emotional 458 predecessor? Watch this space…