592bhp and 311-mile range for Porsche's electric concept. Could its styling preview the next Panamera? 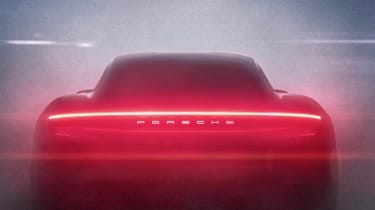 Porsche’s turbocharged 911 Carrera might be Porsche’s most significant Frankfurt launch, but its Mission E concept could pave the way for both future electric sports cars and – given its door count and passenger layout – the next Panamera.

Porsche calls it a ‘coherent design of a sports car with an electric drive and all of the traits that make up a Porsche.’

That means styling clearly influenced by Porsche’s most recent products, including the facelifted 911 and hints of 918 Spyder. It also means a healthy 592bhp output from two electric motors, similar to those of Porsche’s Le Mans-winning 919 hybrid LMP1 car.

No torque figure is quoted, but with a motor at each axle it has the power and traction to dispatch 62mph in under 3.5 seconds and 124mph in under 12 seconds.

The company also says the motors are capable of developing maximum power even after ‘multiple accelerations at short intervals’. More intriguing is Porsche’s promise of a sub-8-minute lap at the Nurburgring Nordschleife from the electric saloon. Some of that speed can be credited to the car’s four-wheel steering, as well as its four-wheel drive. 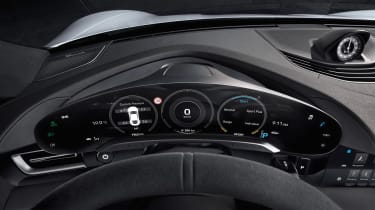 Range is quoted as over 311 miles on one battery charge – close to that of the similarly-powerful Tesla Model S P90D – while fast charging facilitiates an 80 per cent charge in only 15 minutes thanks to 800-volt charging.

That’s double the voltage of existing chargers, but the firm also claims the it allows for lighter, smaller-gauge copper cables. The system remains compatible with standard 400-volt quick-charging stations, while wireless inductive charging has also been implemented.

Another similarity to Tesla Motors’ ballistic electric saloon is Porsche’s placement of the batteries, which run the whole length of the Mission E’s body, between the axles.

This is beneficial for weight distribution and keeps the centre of gravity low – ensuring Porsche can continue to exercise its expertise in handling. The company hasn’t revealed a weight figure – one of the Model S’s downsides – but a mix of aluminium, steel and carbonfibre-reinforced polymer should minimise mass. Rolling stock too is light – the 21in front and 22in rear wheels may be imposing in size, but all are made from carbon.

The styling should come as less of a surprise than the car’s dynamic attributes. Forms are very much inspired by those of the 911 and 918 Spyder, with matrix LED headlights and Porsche’s characteristic four-point headlight signature. At the rear, the slight overlap to the luggage compartment cover references the similar treatment of the 911 GT3 RS’s engine cover.

Less conventional are the counter-opening doors, which reveal access to the four-seat cabin without obstruction from a B-pillar. Little of the cabin will reach production – in a road-going Panamera or otherwise – but the Porsche cues are still there, from the simple three-spoke steering wheel to the bank of five circular instruments ahead of the driver.

At the same time, these instruments aren’t analogue, but virtual representations on a curved OLED display. Functions – Connected Car, Performance, Drive, Energy and Sport Chrono – put all the relevant information at the driver’s disposal.

Changing functions is also innovative, tracking the movement of the driver’s eyes and responding to a button press according to whichever dial the driver is viewing. A parallax effect keeps all dials in view even if the driver isn’t sitting directly in front of the wheel. Mirrors too are virtual – images from cameras in the front wings are displayed in the corners of the steeply-raked windscreen.

Several interior functions are operated by gesture, rather than touch, while Porsche has taken another leaf from Tesla’s book in suggesting the car’s functions could be updated overnight. 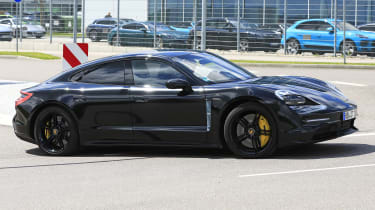 While Porsche calls the Mission E concept an electric vehicle with Porsche values, the car’s form could be seen as a strong indication of the next-generation Panamera.

The current model has always suffered derision over its appearance, so it’s likely Porsche will refine that appearance with the next model – and take greater cues from the latest 911 in the process.

Either way, we’ll get to see the Mission E concept in greater detail over the next few days, where it debuts at the Frankfurt motor show. Stay up-to-date with all our Frankfurt reports on our show hub page.