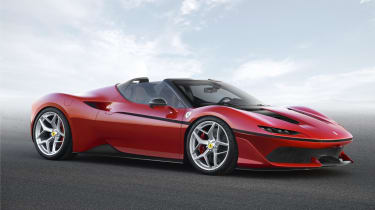 Ferrari has a history of building special, limited-run creations based on its higher-volume models, and this is the latest - the Ferrari J50.

Based on the Ferrari 488 Spider, the J50 has been officially revealed at the National Art Center in Tokyo, and the clue to its purpose is within its name, as it celebrates 50 years of Ferrari in Japan.

Like the 488 Spider, it's a two-seat, mid-engined roadster and develops 681bhp from its 3.9-litre turbocharged V8 - 20bhp more than the regular car. No performance figures have been announced, but it's fair to expect incremental improvements over the production 488.

The greatest changes are to the Spider's styling. For its J50 transformation, the car has adopted a more futuristic - and it has to be said, a slightly more cohesive - look. Gone, for a start, is the Spider's folding metal roof, replaced by a pair of carbonfibre targa panels, but the result reduces the visual bulk that storing a folding roof entails. It's rendered sleeker still by a windscreen that appears to wrap around the cabin, visor-style. 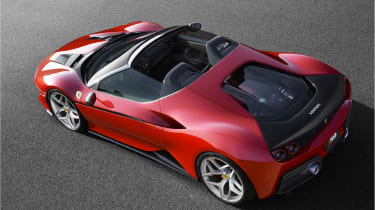 The front end is also more aggressive, with slim horizontal lights in place of the tall standard items, and more pronounced, raised front wings. A distinctive mark is left by the black dividing line that stretches around the J50's nose and into the side air vents.

At the rear there's a return to twin tail-lights on each side - a detail not seen on a Ferrari of this size since the F430. Every line seems more prominent than it is on the 488 Spider and gives the car an impression of its bodywork being stretched over the arch-filling 20-inch forged wheels.

The cabin is less remarkable and more conventional, but there's new trim and a tasteful red and black colour scheme to the leather and Alcantara details.

The work of Ferrari's Special Projects department - previously responsible for the 458 MM Speciale, Eric Clapton's SP12 EC and the P540 Superfast Aperta among others - just ten examples of the J50 will be built, each tailored to its owner's individual tastes.