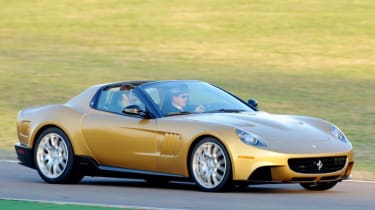 Meet the Ferrari P540 Superfast Aperta. Not a typical Ferrari name, but this isn’t a typical Ferrari. It’s an exceedingly bespoke version of our current favourite supercar, the 599 GTB Fiorano, and it’s the work of Ferrari’s Special Projects division. While it keeps the 611bhp 6-litre V12 and F1 gearbox of the standard supercar, the bodywork is completely different. The P540’s silhouette is reminiscent of a mid-1970s Corvette Stingray, while the front end is a lot like the new Ferrari California. The styling is the work of Pininfarina. Losing the roof has prompted some extra bracing to strengthen the P540, with around 20kg added to the kerb weight. The gains in mass have been kept under control via much use of carbonfibre. It’s been made at the request of Edward Walson, son of the man who invented cable TV. He approached Ferrari in 2008, and after the company okayed his plans, its development began, the Superfast taking 14 months to put together. Ferrari says that Special Projects is able to turn down requests, but was happy to pass Walson’s P540. Anyone who does get a one-off car this way also receives the tooling as part of the purchase, ensuring each one remains unique, although Ferrari reserves the right to buy back both cars and tooling to keep Special Projects produce from being snapped up by speculators. This Special Projects team came bout after the Ferrari Enzo-based P4/5 (pictured, red) was produced by Pininfarina in 2007. Due to it not coming from under Ferrari’s roof it doesn’t wear a Prancing Horse badge and is ineligible for Ferrari concours events. Cars like the P540 will be. Follow evo on Twitter or on Facebook for supercar news