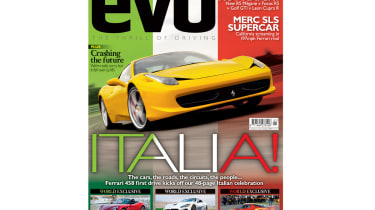 The Ferrari California. It’s a car you’ve probably got a fairly strong opinion on. Out of all the recent produce from Maranello, it’s certainly one of the most controversial. The front-mounted V8 engine, the folding hard-top (and resulting weight), the retro name. They all add up to a car that treads a very different path to the F40, 288 GTO and F50… That’s not to say it’s a bad car. In our acquaintances with it we’ve come away rather impressed, and it’s not the soft iteration of Ferrari we feared it could be. It put in a pretty good show for itself at the 2009 evo Car of the Year shootout, too.

Peruse our gallery below for a smattering of pictures from evo’s California tests, and click the links to read (and see) more. And if you want to revel in the best its home country has brought to the world of performance cars, grab a copy of evo 139, on sale now.

John Barker flings the California around the track on video...

...and then figures the folding hard-top supercar at Millbrook

We give the Ferrari California the full evo road test treatment