Group B race regulations led to the creation of one of Ferrari's most iconic cars, the 288 GTO 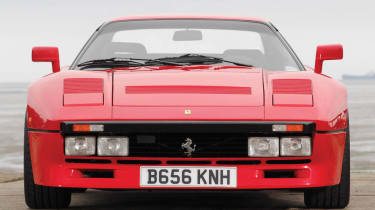 Introduced in 1982, the FIA’s Group B regulations led to the creation of some of the most memorable competition cars ever. The Lancia 037 and Delta S4, Audi Quattro, Peugeot 205 T16 and Ford RS200 were all designed to take advantage of the class’s more relaxed rules, but it wasn’t just rally cars for which Group B was created – there were supposed to be track cars too.

Although most manufacturers wanting to participate in Group B chose to go rallying, Porsche and Ferrari both signed-up to go circuit racing. Their approaches couldn’t have been more different, though. While the German company went down the high-tech route with its four-wheel-drive tour de force, the 959, the Italians had something more simple in mind, a car that would combine strength, low weight and power. That car would be the GTO.

Short for Gran Turismo Omologato (‘omologato’ being Italian for ‘homologated’), the three letters had appeared on a Ferrari once before, on a model considered by many to be one of the greatest Ferraris of all time: the 250 GTO. The new GTO clearly had a lot to live up to, but Ferrari didn’t hold back. Although the GTO bore more than a passing resemblance to the ‘entry level’ 308 GTB, it was in fact a very different car indeed – and that included the body. Updated by Pininfarina design chief Leonardo Fioravanti, the GTO had a longer wheelbase (by some 110mm) and shorter overhangs and acquired flared wheelarches to accommodate the wider wheels needed for racing. The front spoiler was also new, as were the four driving lights above, while at the rear, as a nod to the 250 GTO, there was a kicked-up integrated spoiler and, just behind each rear wheelarch, three slashes for ventilation.

Crucially, unlike the 308, the GTO wasn’t a semi-monocoque design but instead had a separate body over a high-tensile tubular-steel chassis. The doors remained in steel, but to save weight most of the panels were glassfibre (as they had been on early 308 GTBs until cost and quality concerns resulted in a switch to steel). More intriguing, however, was the material used for the bulkhead and front bonnet; for the ultimate combination of strength and lightness, these were made from a Kevlar glassfibre honeycomb composite, as used on Ferrari’s F1 cars and introduced to the GTO by the company’s F1 designer Dr Harvey Postlethwaite.

Beneath the skin, the GTO was fitted with a 2855cc V8 equipped with twin IHI turbos, and it was from this engine that the car would gain the ‘288’ (2.8 litres, eight cylinders) part of the name that it would become more commonly known by, even though its official title would remain simply ‘Ferrari GTO’. Essentially an underbored version of the 2927cc unit used by the 308 and Mondial, the capacity of the GTO’s engine was arrived at because, once multiplied by the FIA’s 1.4 ‘equivalency factor’ for turbocharged cars, it would see the new Ferrari squeeze neatly under the 4-litre engine-size limit.

Unlike in the 308, the GTO’s mid-mounted engine was fitted longitudinally rather than transversely (hence the need for the longer wheelbase) to help accommodate the new turbos. Producing 400bhp at 7000rpm through a five-speed gearbox and a limited-slip differential, the GTO could hit 60mph from a standstill in just 4.9sec – nearly two whole seconds faster than the 308 – and would go on to 189mph. In ‘Evoluzione’ race-spec it could lay claim to 650bhp and, depending on gearing, a top speed of 225mph.

But there wouldn’t be much call for the race cars. Due to the lack of interest from other manufacturers, the Group B race series was cancelled. Porsche would turn to rallying with its 959, but Ferrari would abandon the idea of competing with the GTO. As such, it no longer needed to produce 200 GTOs for homologation, but the demand was so great for what, upon its launch in 1984, would be the fastest production car in the world that Ferrari went ahead and built the road cars anyway – 272 of them.

The GTO may not have proved itself in competition, but it didn’t need to. Its performance, rarity and beauty, perhaps with a little help from the three letters on its rear, meant its iconic status was assured.