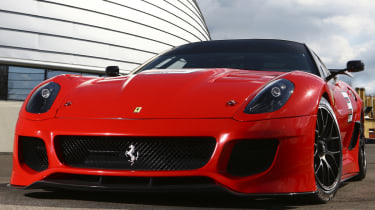 The Ferrari GTO is back. A scorching version of the 599 GTB Fiorano supercar is set to wear the Prancing Horse’s most famous initials.

It will be the first time the GTO badge has been used since the 288 GTO went west a quarter of a century ago. During a recent interview with evo, Ferrari CEO Amedeo Felisa remarked that the company had changed the internal classification of its flagship 599 from being a ‘GT’ car to part of the ‘Sports Car’ division, alongside the newly launched 458 Italia. It’s this change that has allowed the development of a more extreme version of the 599, much in the same way that the Scuderia was developed from the standard F430.

The 599 GTO will effectively be a road-going version of the track-only £1million Ferrari 599XX and in terms of dynamics will sit well above the current 599 HGTE. Chiefly by raising the rev-limit of the 599’s Enzo-derived 6-litre V12 to 9000rpm, power has been boosted to a whopping 700bhp – an increase of 89bhp over the standard car.

And with quicker gearchanges (down from 100 milliseconds to around 60), expect the 0-60mph time to tumble from 3.7sec to around 3.2, while top speed (205mph in the 599 HGTE), could rise to an Enzo-rivalling 217mph. Which means there’s a very real chance the 599 GTO could be Ferrari’s fastest ever road car.

The UK is slated to get 50 cars, priced at £300K each, with deliveries expected to start as early as May. You can read about the 599 GTO in greater detail (as well as finding out about a new rear-engined rival from Porsche, the GT2 RS) in Issue 140 of evo, on sale now.