German tuner Gemballa has a go at the Ferrari Enzo supercar. Meet the mad MIG-U1 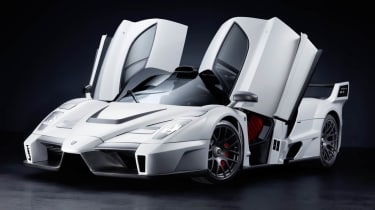 Gemballa is a tuner you’d normally associate with Porsche. However, the German company is upping its game; here’s its take on the Ferrari Enzo.  Limited to just 25 models, the MIG-U1 is a lighter, faster and wilder version of Maranello’s finest hypercar. So, power. The Enzo’s 6-litre V12 is cranked up to 690bhp (a 40bhp rise), thanks to a revised exhaust system with pneumatic flap control and some tweaks to the mapping on the ECU. Power is delivered through forged wheels, which stretch to 335mm at the rear and shave a total of 16kg from the un-sprung mass of the car. The wheels are in a staggered configuration, with 19in rims up front and 20in at the rear.  Sporting a bodykit designed by Gemballa, the car is wider than an Enzo (80mm at the front axle and 100mm at the back). The active aerodynamics have been altered to produce a further 35kg of downforce at the front, while the rear gets another 85kg thanks to a flap which lowers when you reach 75mph. Speed bumps are of small consequence, too, thanks to a button which raises the car’s nose on demand. A further press will lower the car again, or it’ll return to normal itself at 50mph.  The interior gets a makeover too. Specially designed seats are installed, and covered (along with everything else) in a fetching combination of leather and suede. There’s a multimedia centre, complete with touch-screen control and iPod connectivity. Oh, and a 950-watt stereo in case that bellowing V12 ever gets old.  With a limited run of 25 cars (each individually built for its owner) we doubt we’ll be able to wangle a test drive to give you the definitive word on how it drives. The original Enzo was a masterpiece, though, and the closely related Maserati MC12 was brilliant. Quite some act to follow, then.

See the standard Ferrari Enzo in our fastest ever track test