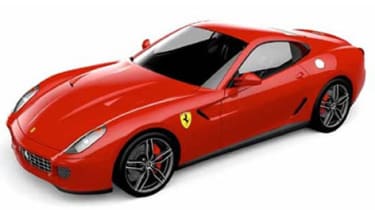 Ferrari is launching a special package for the 599 GTB to celebrate 60 years of race wins in Formula 1. Based on the 599 GTB with the HGTE package, the commemorative pack is called the 60F1.

The 60F1 is mechanically unchanged from the 599 HGTE, itself a stiffer, more responsive and more focused 599 GTB, powered by Ferrari’s 611bhp 6-litre V12. Instead it’s a host of cosmetic tweaks, with three livery options available. There’s one based on the 375 F1 driven to Ferrari’s first ever Formula 1 victory by Froilan Gonzalez in 1951, and two inspired by Fernando Alonso’s 2011 150° Italia F1 car. All the cars get the Scuderia Ferrari shield painted on the front wheel arches, a satin finish aluminum fuel cap and 20in diamond-finish forged alloy wheels.

The 60F1’s cabin also takes cues from both Froilan and Fernando’s racing cars. The dashboard and seats are trimmed in lightweight materials such as Alcantara and a metallic fibreglass called Alutex. The new seats also feature an innovative technical material known as Superfabric designed hold you firmly in place during extreme driving situations. European cars get Sabalt seats while those sole in the US gain Recaros. The 60F1’s track-special feel is further underlined by FIA-spec red and blue four-point safety harnesses and the Scuderia Ferrari shield stitched into the headrests. A silver plaque barring both Gonzalez and Alonso’s signatures sits on the dash to further highlight Ferrari’s proud Formula 1 heritage.

The 60F1 pack has been revealed at the same time as Ferrari’s Tailor Made programme, its newly created outfit that enables each customer to individually spec every aspect of their car’s detailing, materials and colour. 60F1 spec is available on all 599 HGTE’s and won’t be limited-run, though with the V12 supercar’s replacement due to be revealed in spring 2012, this looks like the 599 GTB’s last foray into the lime light.