The 599 GTO is the fastest Ferrari ever around Fiorano. But is it also one of the greatest? We find out 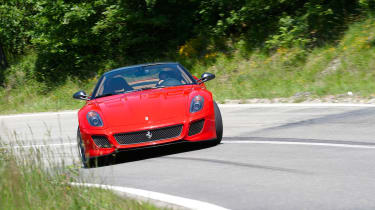 And first, before we delve into the juicy stuff, we must discuss the official line on that name. Understandably, Ferrari uses the coolest go-faster tag in the known universe sparingly. History shows that only twice before has The Scuderia attached the ultimate mark of speed and desirability to the buttocks of a street machine.

You know as well as me that those two cars are the 1962 250 GTO and the 1984 288 GTO - both were defined by performance and an intention to go racing. Gran Turismo Omologato is the full description, and homologation was the purpose in both cases, albeit with vastly differing outcomes. The 250 enjoyed a great career, but the 288 GTO was born of the Group B regulations that never delivered the Porsche 959-versus-GTO-at-Le-Mans battles we all craved – leaving it as simply the fastest and most desirable Ferrari road car of its day.

So how does this new car, based on a road machine and with no specific intention to go racing, justify the name? Well, according to Ferrari, it does so by taking much of the technology from the track-only 599XX, which Ferrari has always stated would never race, and making it available with a licence plate: it homologates the XX for road use. It’s a neat spin, if perhaps a little disingenuous…

Little of which seems to matter when you’re in the presence of the machine itself. I’m no PR man, but my advice to Ferrari would be to tell anyone who thinks that this quite remarkable 661bhp machine doesn’t deserve its name to shut up, go drive it, and then decide. Only then, once their back has dried, their ear-drums have de-bruised and their reactions have adjusted back to the slow-motion replay that is the post-599-GTO reality, will they be able to make a call on the GTO debate. Me? I couldn’t care less: what really matters is Ferrari making the fastest and most powerful road car in its history.

Before we delve into the specific changes from GTB to GTO, it’s as well to understand the aims of this project. They are, in fact, very simple. Besides translating some of the new technologies wrought through the XX project into a road application, the intention was to extract maximum circuit performance from the 599 package, but still retain enough usability for the car to be pleasant on the road. More specifically, there seems to have been an almost religious zeal to seek out and banish understeer. Every time the ‘u’ word was mentioned by engineers and development drivers, it was delivered with a grimacing sneer, as if it were a sworn enemy, a dynamic parasite to be hunted down and expunged.

The 599 is not an obvious base for a light-weight sports car. It may boast an aluminium bodyshell, but it’s a big machine with a 6-litre V12 wedged between the front wheels. The path to sharper responses has of course embraced the standard methodology: make it lighter and add more power. But it’s the sheer number and scope of the changes that impresses, helps justify the £299,300 price tag and underpins Ferrari’s assertion that this is much closer to being a 599XX with number- plates than a 599 HGTE-Plus.

For starters, engine power rises from 612bhp to 661bhp. I have to keep squinting at that number because even now it seems pretty incredible. Internal friction has been reduced by 12 per cent through all manner of tweaks: DLC (Diamond Like Coating) for the tappets, superfinished cam lobes, a new shape for the crankshaft weights and a new design of piston skirt. Compression rises from 11.2 to 11.9 and the breathing has been completely overhauled.

Ferrari has crafted a new aluminium intake system that uses shorter runners and saves 2kg, but the engineer responsible was almost moved to tears when he admitted the XX’s carbon intake just wasn’t suitable for the road (it would have saved a further 3kg). The exhaust system is hydroformed – effectively blown into shape, thereby avoiding the heavy seams that come with even the best welding. The process thins the metal from 1.5mm to 0.8mm and saves a remarkable 15kg over a standard system. Lord knows what it’ll cost to replace. Throughout the car, an impressive 100kg has been shed.

Gear ratios are down six per cent, the car now hitting its claimed 208mph maximum on the 8400rpm rev-limiter. For the record, Ferrari is refreshingly uninterested in the subject of top speed. I like that.

If the engine work is comprehensive, the chassis goes even further: new springs, dampers, electronic systems, wheels, tyres and a new generation of carbon-ceramic brake that uses, for the first time in a road car, a ceramic pad material. The mission statement behind the changes is fascinating: it shows how important ultimate lap time was to Ferrari, because, in its own words, the GTO was designed to be ‘nervous, not easy to drive’.

That deserves some explanation because it’s open to misinterpretation. We all know that a fast racing car is one that treads the finest line between outright speed and spikey handling. The GTO embraces that philosophy. But it does so with the assistance of some mighty impressive electronic wizardry. In essence, what Ferrari has done is tune the 599 to produce the maximum mechanical grip, then calibrated the traction and stability control systems to make it as driveable as possible at the limit. It is often said that the latest generation of jet-fighters are inherently unstable to give them extreme agility, and that they would be un-flyable without computer assistance. To a lesser extent, the same is true of the GTO.

At Fiorano, the car is brutally fast. It laps a second faster than any other Ferrari, and that’s despite weighing 300kg more than a 430 Scuderia. It also feels fundamentally different to the GTB, because you can carry so much more speed into a turn and then continue to lean on the front axle. The front wheels are now 1.5in wider and tyre size has grown from a 245 to a 285 section, which is pretty remarkable. It also dramatically alters the stance of the car. The rears grow by 0.5in, allowing a 315-section rear tyre to be fitted – traction is excellent, but it’s still possible to melt them with the systems disengaged. It’s special rubber too, the first of a new generation of high-performance rubber from Michelin called Pilot Super Sport.

Within reason, it’s actually quite difficult to make the GTO understeer, even with the systems off. However, only a loon would switch them off in this car, not necessarily for risk of ditching it (although that remains a very real concern), but because you’d miss out on one of the great automotive experiences.

The GTO’s list of go-faster aids is pretty bewildering. It uses the now familiar F1-Trac system to harness those 661 horses, but it now has SCM2, which is a second-generation Skyhook damper – the type with magnetized fluid that can alter viscosity through electric current. The main difference on the GTO is that it is fitted with three accelerometers from the XX that relay real-time data to SCM2, whereas the GTB’s dampers have to use approximate data. It’s very, very clever stuff.

And it translates into a mind-expanding rush, especially if you’ve just grabbed a few hours’ sleep and rushed to Fiorano of a Monday morning. Immediately you’re aware that the car is set up right on the edge of what’s acceptable in something road-legal: with the tyres warm, I trailed the throttle a little mid-corner to see what the effect would be, and the car snapped straight into oversteer. This, by the way, is cause for celebration. You have to drive the GTO properly: stop, steer, gas.

The steering is even quicker than on the 599 HGTE, but not so fast that tipping into a turn is hard to judge. It doesn’t offer much feel, but it is consistent with all the other control weightings. The latest F1 automated manual is superb, giving 60m/s shifts at Fiorano (that’s 40m/s faster than a GTB) yet able to slur the action in town. The GTO’s enlarged carbon paddles should be on all 599s, they just feel ‘right’.

The noise? Not quite as crazed from inside the cabin as you’d expect, although it sounds far more urgent than the GTB, but the outside world is treated to four-fifths of the Le Mans soundtrack. In its upper reaches, the V12 gets sharp and angry. Performance is other-worldly, although strangely it feels more contained than it does in the GTB, mostly because the chassis is now so competent that the great yaw-ing, pitching moments under acceleration and braking in the GTB are gone. Ferrari claims it’ll do a standing km in 19.9sec, which makes it one of the fastest cars ever made.

Braking performance is stunning. The latest CCM2 brakes are now 3.5kg lighter and the way they haul this 1700kg lump back from 150mph-plus to 40mph for Turn 1 at Fiorano has to be felt to be fully appreciated. However, they grumble like Norah Batty on the road.

The new Michelin is especially impressive. It offers double the tread-depth of a conventional ‘Cup’ tyre (about 7.5mm) but Ferrari reckons it is no slower around the track and will stand some very hard abuse. In the context of road usability, it’s an important point, because the 599’s fundamentally practical shape remains unchanged in the GTO, and people are bound to want to use the car on the road. To do so will mostly be a pleasure – yes, it’s a little harsher on the ears and the ride is firm, but then the GTB isn’t the most compliant machine around.

There are a couple of issues on the road. First, the car struggles to find traction on poor surfaces in a way that, say, a 458 Italia doesn’t. It’s not a problem, more a minor frustration. And the air-con on the test car really struggled to keep us cool. Okay, it was a hot day, but the GTO is a great, red, heat-soak.

You could go on about this machine for an entire issue. The thinner glass is 5.5kg lighter, forged wheels and titanium bolts save an eye-popping 22kg, and Sabelt’s snug carbon seats trim another 17kg. It’s a detail masterpiece, a track genius, a road tonic and yet another great Ferrari. Oh, and it fully deserves the badge.