We road test the last ever Pagani Zonda supercar, the loony Cinque Roadster. A fitting send off? 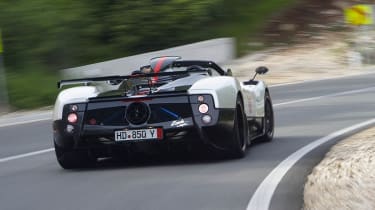 Another limited-edition Zonda, but Horacio Pagani assures us that the Cinque Roadster will be the final iteration of his iconic supercar, which burst onto the scene way back in 1999. A roadster version of the Cinque wasn’t planned initially, but customers kept knocking on Horacio’s door and begging him to build one. It costs £1.5million.  Technical highlights?

Just like the hard-top Cinque, core to the Roadster is Pagani’s new ‘wonder material’, carbo-titanium. A type of carbonfibre with threads of titanium woven into it, it was first seen on the track-only Zonda R and will be making a major appearance on the Zonda’s replacement, the C9. Here, however, it allows Pagani to shed some extra kilos from the Zonda’s already bantam-weight monocoque chassis while also adding even more stiffness to the tub.

There are magnesium suspension components, carbonfibre brake discs and magnesium alloy APP centre-lock wheels, all of which help the Cinque Roadster to tip the scales at a feathery 1210kg dry, which is 70kg lighter than the original Zonda S Roadster from 2005.

The best Zonda we’ve ever driven, much of the praise actually going to its automated gearbox, not seen on non-Cinque Zondas. The smooth roads we tested the car on suit its lowered, stiffer chassis perfectly – although we know from our previous Cinque encounter that while it looks almost race-car low, it copes remarkably well with less-than-perfect tarmac – and the gearchange is so much better than expected.

Okay, it is a bit more ponderous going down the ’box than it is on the way up, and it’s not nearly as quick as, say, the ‘F1’ shift on a Ferrari 599, but then the quality of the manual gearchange on a standard Zonda isn’t exactly great either, subconsciously making you use more of the low-down torque of the mighty engine than you might do were the gearchange not so obstructive at times.

In the Cinque, however, you flick up and down the gearbox all the time, using the horsepower in the upper reaches of the rev-range more than in other Zondas, the Cinque feeling much more alive as a result. It’s a paddle-shifter for those of us hooked on manuals – rev it to the red line and it won’t change up until you instruct it to, so you always feel in control. The perfectly positioned paddles actually make changing gear a pleasure, too.How does it compare?

Does it matter? If you can afford a £1.5million Zonda, you can afford just about any other car to sit alongside it too. If it’s a supercar dogfight you want, there’s a Pagani Zonda v Porsche Carrera GT v Ferrari Enzo v Bugatti Veyron video here. We’ll take all four.

Just five will be built, and it’s the swansong for Zonda production, a reveal of the striking new Pagani C9 supercar imminent. Whether that will enjoy an eleven-year life abundant in special editions is uncertain.