Pictures and specs of the new Ferrari LaFerrari and McLaren P1, arch rivals revealed at Geneva 2013 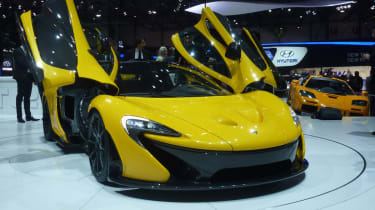 The McLaren P1 and Ferrari LaFerrari are undoubtedly two of the most closely matched hypercar rivals the world has ever seen. You only have to take a look at the figures to see how seriously both companies are taking the competition:

The McLaren P1 uses the same twin-turbo V8 as the 12C plus an electric motor to produce a total power output of 903bhp, whereas the Ferrari produces a total of 950bhp from a normally aspirated V12 and assistance from a similar electric-hybrid system.

Both cars claim a 0-62mph time of ‘under 3.0 seconds’. The McLaren has been limited to 217mph, and Ferrari’s official top speed is simply quoted as ‘in excess of 219mph. The UK price has been confirmed for the McLaren at £866,000, and the Ferrari will come in at just over £1m.

Read the full story of the McLaren P1 here

Read the full details on the Ferrari LaFerrari here