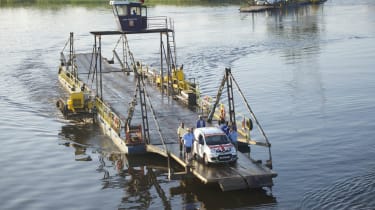 We crossed Botswana during the night. A shame we could not have seen more of this beautiful country. At the Kazungula ferry, border formalities were processed in minutes - getting hold of immigration forms in advance shaved off a lot of the hassle and time and we successfully reached the Zambezi as the sun rose over the water. Nearly a mile wide and fast flowing at this time of the year, our crossing into Zambia had to be done by a pontoon. With just the Panda and crew aboard, we chugged our way across, in the company of a pair of crocodiles.

Once the ramp bit into the dirt of the northern bank the Panda's front wheel inched forwards off the pontoon and squeezed through a gap in a line of trucks. Border formalities took less than ten minutes - and we were being waved out of the gate and onto the road to Livingstone.

We are taking a little time out for a quick and wonderfully invigorating shower and our first proper breakfast since leaving the Cape Town. The Cross Roads hotel are providing omelette and chips, and we have arranged a pit-stop refuelling to take on 20 litres of avgas. The idea is to use this to pep up the local petrol which is only 92 octane. The start of day two sees us having knocked off 2400 kilometres so far... and the Panda is performing magnificently.

Grappling with torrential rain on the road to Mpika

We promised Lynn Boynton of the Zambia Motor Sports Association that we would reach her road-side Lusaka pit stop at 1.15pm and with one minute to go, Paul turned the Panda off the main road into Sandy’s Creations garden centre after driving the five hours from Livingstone and the Kazungula pontoon.

A further eight hours remained before our next planned stop, Paul opting for an afternoon ziz after we had tucked into Lyn's sandwiches and flasks of tea. He woke up to find the wipers on full speed and Philip grappling with torrential rains of a tropical thunderstorm. Clouds so black the headlights were on and vision was down to 20 yards. And while he had managed to sleep, the Panda had been excelling at its traffic beating qualities cutting through the traffic snarled streets of Lusaka. No big and heavy 4x4 will weave in and out, punch its way down the outside of a line of slow moving cars to jump into what look impossibly small gaps, with anything like the remarkable agility of our Fiat Panda. Vicious thumps of 'sleeping policemen' along with ruts and potholes, conditions today have been the hardest going so far, apart from the surprise turn of the weather.

Our hectic non-stop foot-down press on regardless approach to all this sees us finally snatch a short break tonight. We are ahead of our schedule - beating our own target - so plan to take a couple of rooms at the Mazingo Lodge in Mpika. A bowl of hot soup and spaghetti, followed by a shower and a first change of clothes since Cape Town, and maybe a few hours sleep, is hopefully the prize for being early. We plan to be back on the road again before 2.00am for the final 400km to the border with Tanzania. We want to be there at 6.00am... border opening time.

Read the report from day 1 here