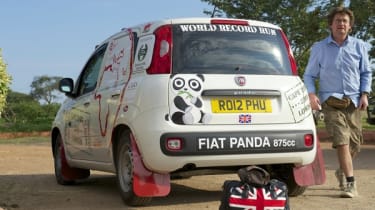 After our short sleep we are on the road again. As we climbed uphill steadily, leaving the plain of Mpika behind, we are both surprised at the number of trucks on the road at this early hour. No longer clipping along with the speedo hovering over the 70 mark, our usual pace has dropped. The road is a lot more bumpy and while the combination of good headlights and two spotlights is proving so useful, deciding if a black streak across the road is a freshly patched hole, or just an oil-stain... or a vicious pothole that jars the suspension joints with a crack that makes you fear for your wheel bearings, is a hard judgement call.

We come across numerous lorries sitting on their axles. Broken trucks with no lights, and no warning triangles - drivers having put out branches of brushwood - now dominate the night. A few times we are hit by light showers of rain. Butterflies, moths and insects have smeared greasy streaks across the windscreen, and with what was left of the contents of the washer bottle used up in yesterday's thunderstorm, the temptation to flick on the wipers just has to be resisted. Adding to the concentration, sudden patches of thick fog slows progress even more.

We have decided to split the night drive to the border 50/50, leaving each passenger cursing why the driver hasn't got the speed scrubbed off before clouting a trench or hole in the road. It proves impossible to avoid hitting the odd hole so hard we are both left wondering why the dashboard and wiring loom are not around our ankles. Respect for the Pandas strength and its preparation grows by the hour, and mixed into the emotions of our frustrating progress.

We flick on the two small hazard lights on top of the screen pillars. Like birds in the jungle that puff up their size as a defensive tactic, the flickering roof lights make us more visible, a more unusual shape to the oncoming truckers, in the hope we get a few inches if extra room as we pass on the narrow strips of broken-up Tarmac. Oncoming drivers try to intimidate the other in a game of chicken, the loser having to swerve onto the rough dirt strips that line the edges of jagged bitumen. Avoiding a puncture from the edge of a lump of tarmac rubbing the inside of a tyre is a constant worry.

The road to Tanzania has been the hardest and the most challenging so far. At 3.30am and with 168km to go, we find ourselves down to first gear - weaving in and out of muddy pools of water. A Mitsubishi Shogun pulls over and signals us to overtake. We have been in convoy, a close-formation drive at walking pace, but the 4x4 driver now wants to use our better lights and tuck in behind the Panda. We come across a truck on its side. Then another, having run off the road, brake failure, steering failure or dozing driver responsible for tipping a heavy load deep into the brushwood. Roads like this are crippling Zambia's economy.

Tall grass, over three metres high, suddenly lines the road and creates weird shapes to the shadows dancing across the road ahead… and all the time the agile little Panda flicks from side to side, weaving in and out in a bid to avoid the worst of the craters that litter the road to the frontier. From one side to the other, using the full width of the road, again and again, we zig-zag our way onwards.

The average speed at the start of the day in this night-drive drops some more when we both decide it’s time to open up the two flasks of coffee, given to us yesterday lunchtime by Lynn Boynton. No time to stop, it’s breakfast on the hoof. Paul in the passenger seat turns the top of the dashboard into a kitchen table while balancing flask between his knees, a plastic box of sugar on one leg, a pack of long life milk in one hand, cup in the other, and two spoons in his mouth. Suddenly... Bang! We've hit another blasted crater.

Compare the attitude of the Tanzanian customs chief with that of the lady who works out of the gatehouse on leaving Zambia. The lady has an open fronted three sided wooden shack with a couple of sheets of corrugated iron on the roof. She is the last person you see of Zambia's officialdom and it is her job to see that anyone leaving has their paperwork in order. We give her our passports - correctly stamped. And the Carnet de Passage, the booklet of counter foils that enables a car to cross international borders without paying import duty. Ah, says Mrs Zambia, your Carnet needs a rubber stamp! She then instantly apologises. The Chief keeps the stamp, and he has gone to church. "But you can go without a stamp - I will sign it instead" signatures are added, a counter foil record is torn off, and we are waved away with a "Good luck, safe travelling".

One hundred yards across the muddy compound, you find the customs office of Tanzania, and a process hidebound in red tape. Drive out without the chiefs rubber stamp and it will have all the checkpoints in Tanzania glad of something to do.

Moving towards Kenya neither of us will be sorry to see the back of Tanzania. The country cripples itself by placing speed bumps every few kilometres. Some are vicious, designed to catch out the unwary. Gullies, holes, trenches are also mixed in and today we have seen the country's transport system first hand. Broken down trucks litter the countryside. Progress in terms of delivering goods from one place to another is a hit and miss affair. Truck drivers face a daunting task - we have passed several trucks that have run off the road, mangled wreckage suggesting that severe injury and death is a daily occurrence.

Endless checkpoints, usually young police on the make, hamper our progress. We are spending a night of slow progress, wondering what else we can give away when the caps, t-shirts, cigarette lighters and miniature whiskey bottles have run out.