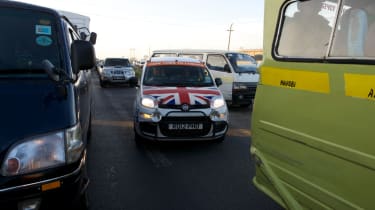 Fantastic border crossing into Kenya, met up with friends and had breakfast after crossing the Equator. Hit Nairobi in the morning rush hour and managed to get wedged for a while between a truck and a pickup... literally. Luckily there was hardly any damage. Then on to Marsabit. The road here was the worst we've ever encountered, with huge craters made worse by recent heavy rain fall. It meant driving really slowly in first gear trying to dodge rocks and washaways. We stopped in Marsabit to check the Panda over, the sump guard was hitting the engine and needed straightening. Knowing we had to continue at this pace for the next 300km through the night to get to the border as soon as it opened, we decided to take along a mechanic and an armed guard.

Read the report from day 5 here