Fiat Panda review – More grown up than ever, not that you can tell by looking at it

Whether it’s the basic hatchback or rugged 4x4 and Cross, the Panda is fun utilitarian transport

The basic outline and underpinnings of the Fiat Panda haven’t really changed since the modern version was launched in 2003. Despite a distinctly similar appearance every external panel of the current Panda has changed; it has happy-looking face and a generally cartoonish air pervades outside and in.

The current Panda is claimed to emulate the functional, carefree approach of the original 1980 Panda – a car that had flat glass, hammock-style seating and an open-plan dashboard. And it’s become Italian again – with production switching to Fiat’s Pomigliano d'Arco factory near Naples – the previous Panda came from Tychy in Poland, a factory that’s now fully occupied with producing 500s, Lancia Ypsilons and the occasional Ford Ka.

> Read our review of the Ford Ka here

Just like the old boxy Giugiaro-designed Panda you can get a rugged off-road version of the current model too. Simply called the Panda 4x4 it’s like the regular car, just with a raised ride-height and four-wheel drive. An even tougher version, the Panda Cross, has all the same basic hardware as the 4x4 but with extra body protection, metal skid plates, LED daytime running lights and hill-descent control.

Under the skin the new Panda has a development of the previous car’s platform, with larger and softer suspension bushings, a stiffer rear torsion beam and front strut top mounts which decouple spring from damper.

Inside it’s mostly basic and functional. The ‘squircle’ shaped gear knob, air vents and, well, just about everything, are quirky and fun looking. As are the tiny letters spelling ‘PANDA’ moulded all over the hard plastics. The only hint of anything useful over the very basic equipment is a sliding rear seat option, which reduces rear legroom for a boot space gain. 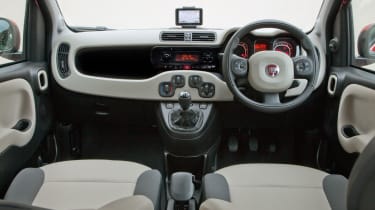 Engines mirror those of the Fiat 500, with a 68bhp four-cylinder 1.2, a 74bhp 1.3-litre turbodiesel and a 0.8-litre two-cylinder turbo ‘TwinAir’. Don’t write the two-cylinder engine off as too small or too weedy, it’s the most powerful of the pack with 89bhp. It manages to punch above its weight thanks to a turbocharger and some clever hydraulic interference between the camshaft and the inlet valves. This allows valve lift and timing to be variable across the rev range to increase performance and efficiency.

The two-cylinder engine hardly endows the Panda with an exceptional 0-62mph time though, it completes the acceleration dash in 11.2sec, a whole 3sec faster than the 1.2 petrol. The TwinAir Panda 4x4 reaches 62mph from a stand still in 12.1sec while the diesel version takes 0.4sec longer. Weirdly, the official acceleration times for the Cross are faster than the 4x4 by 0.1sec when it’s powered by the two-cylinder motor, but 0.2sec slower when it’s got the diesel engine.

The last Panda was good fun in a basic, chuckabout way but a bit crude, especially if bends or bumps were involved. This new one feels much more solid and refined, isolating road shocks well while feeling keener to change direction. It grips well, doesn't flop into roll and feels agile enough to be fun on a twisting road. Ultimately, though, there’s understeer with little scope for trimming the line with the accelerator.

You sit quite high, with the high-mounted gear lever in easy reach. Pressing buttons can disable the stop-start system or switch the steering to super-light city mode. The steering itself feels more fluid and natural than the 500's, with less artificial resistance around the centre. The handbrake resembles a computer mouse with the release button on the side, but it's a proper mechanical lever and the ergonomics work well. 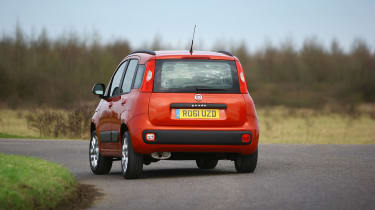 The TwinAir suits the Panda's cheeky character well. The power and torque figures are unchanged from those in the 500, but a revised throttle map sharpens the initial response and makes the Panda feel livelier.

Despite a cylinder deficit the TwinAir has enough grunt to make the whisk the Panda along at a reasonable pace. Every time you prod the throttle there’s a pause before you get a mild shove forward. It isn't fast, and you wouldn’t expect it to be, but it certainly isn't catastrophically slow either.

The noise and character of the TwinAir engine divides opinion. Some like the grumbly noise and the surprisingly punchy mid range, while others think the noise is too industrial, the way it revs too lethargic and the soft rev limiter that slows acceleration way before the red line incredibly frustrating. The Panda’s other engines are more conventional, but not exactly noteworthy.

As you’d expect the jacked-up Panda 4x4 and Cross roll a little more than hatchback. The first few degrees of body movement as you turn the wheel are a little unnerving, but muster the commitment to push the rugged Panda harder and you find the roll doesn’t increase much more.

What you get to compensate for the body roll is a compliant, comfortable and robust feeling ride. Over very rough surfaces at speed the wheels don’t feel especially well controlled, especially on the inside unloaded ones when cornering.

The off-road Pandas, despite an extra driven axle, exhibit similar handling characteristics to the road biased cars. It’s fun and lively, but will ultimately understeer. However, you can sometimes feel the rear axle receiving some torque. It doesn’t allow you to adjust the car, or feel at all effective on the road at all, but it is palpable. 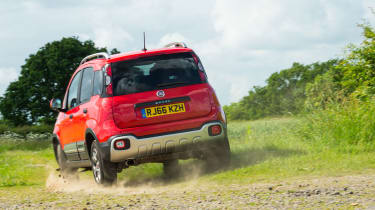 A basic Panda costs £9405, a standard 4x4 is £14,605 while the Cross starts from £16,255. The Panda, although a little longer than before, is a true supermini. It's also longer than its arch-rival, Volkswagen's Up, yet has slightly less rear legroom and boot space. A rear passenger behind a tall driver would not have a good time. Compared with a Fiat 500 it's roomier, more versatile and more the cool gadget, less the fashion object. And of course it has five doors.

> Find out what we think of the Volkswagen Up TSI

If it’s economy you’re interested in don't expect the real-world fuel economy to be anywhere near the official average of 67.3mpg from the TwinAir engine. 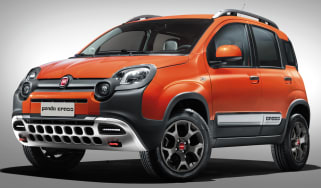 The Fiat Panda Cross adds an even more hardcore off-road 4x4 to the model range. Pictures and details here.
Visit/fiat/panda/7262/2013-fiat-panda-trekking-review 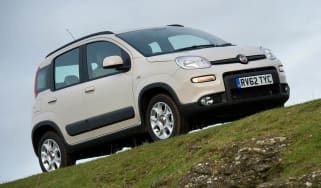 The Fiat Panda Trekking offers a budget alternative to a proper 4x4 crossover. It's fun, too
Visit/fiat/panda/14116/volkswagen-up-vs-fiat-panda-twinair-review 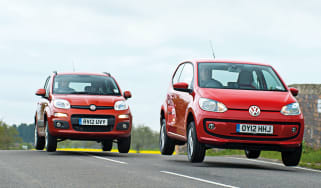 The Fiat Panda TwinAir and Volkswagen Up both cost less than £11,000 and promise to achieve over 60mpg, so can they really be fun to drive too?
Visit/fiat/panda/13010/fiat-panda-beats-the-cape-town-to-london-record 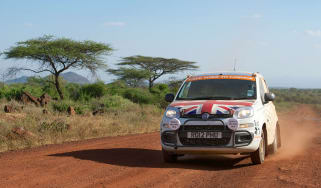 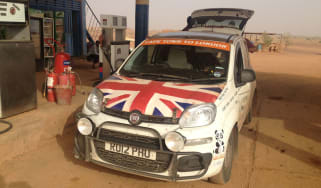 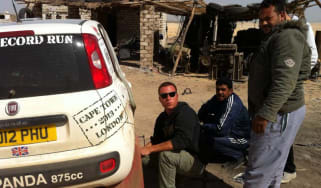 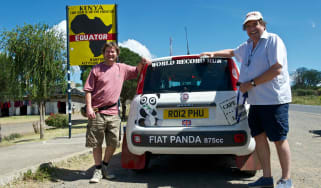 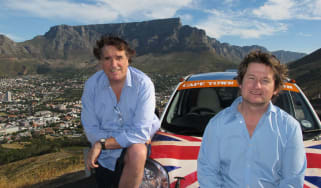 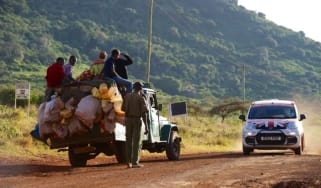 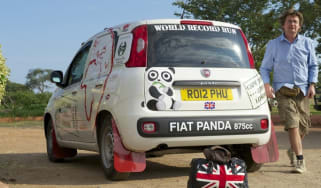 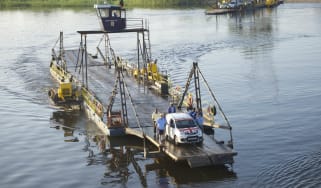 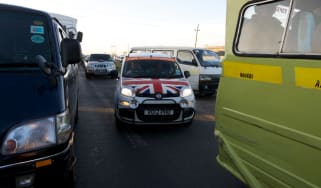 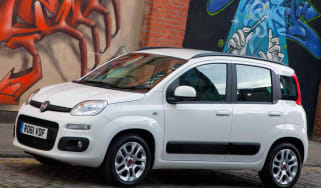 Fiat has priced its new Panda supermini range, with the cheapest kicking off below £9000
Visit/fiat/panda/11914/all-new-fiat-panda-revealed 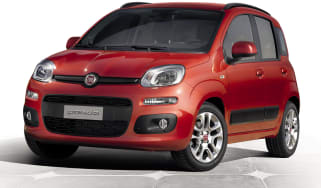 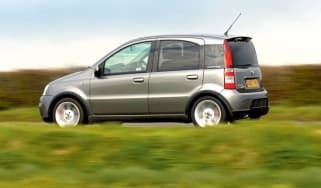 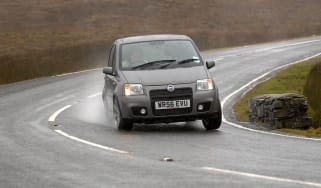 Aside from the ride quality, there was little to dislike about the Panda
Advertisement
Visit/fiat/panda/8514/fiat-panda-100hp 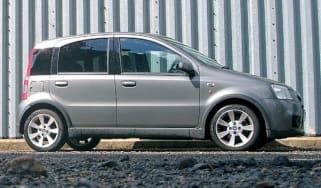 Readers have been contacting us in praise of the Panda 100HP. Richard Meaden is their Fiat-driving champion
Visit/fiat/panda/8553/fiat-panda-100hp 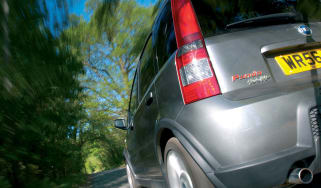 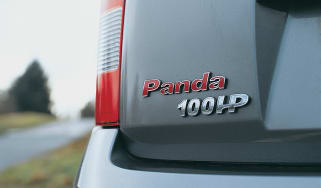 Official: Jeremy Clarkson wrong about Fiat Panda 100HP! (Well according to Richard Meaden, who disagrees that the Suzuki Swift Sport is better)
Visit/fiat/panda/14313/fiat-panda-100hp 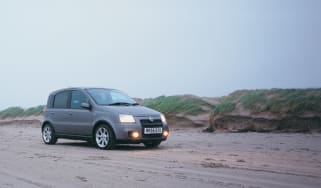 Richard Meaden really enjoyed the Fiat Panda 100HP he drove a couple of months ago. In fact he liked it so much he persuaded Harry to add it to the fl…
Visit/fiat/panda/6483/fiat-panda-100hp 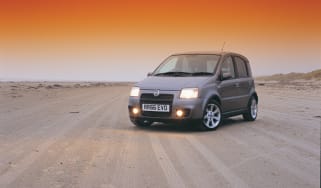 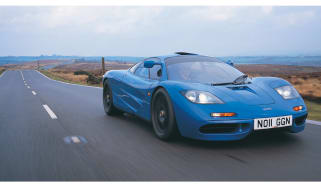 The most mis-matched head-to-head ever? A McLaren F1 is challenged by the mighty Fiat Panda 4x4!
Advertisement
Visit/fiat/panda/6465/fiat-panda-100hp 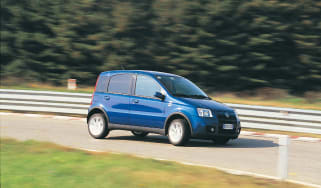 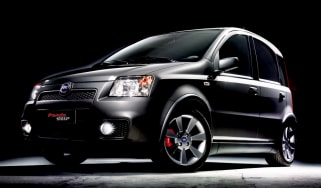