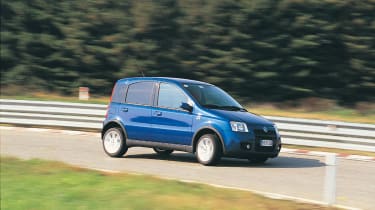 Proper driving fun for under £10K. Can it be done? Yes, with a Ford SportKa, a car which should be a whole lot more popular than it is. But it’s an old design now, and its 1.6-litre, single-cam, eight-valve engine is hardly an object of sophistication. Meanwhile, the cars we used to know as superminis are getting ever larger and heavier and more expensive, and a vital part of a budding car enthusiast’s raw material is being expunged.

But wait… what’s this? Fiat, a company defined by its small-car past, has spied the market gap and is aiming to plug it with the object you see here. It’s the £9995 Panda 100 HP, a hot(ish)-hatch interpretation of the small Fiat whose repertoire runs from utility cheapohatch to credible 4x4 to this new machine, all with the same bodyshell. It works because a Panda looks like nothing else, so it can make its own rules.

The mystery is that it has taken so long. A couple of years ago, at Fiat’s Balocco test track, I drove a prototype of a possible Panda Sporting. It had an 89bhp Punto 1.4 engine, ultra-firm suspension and the best sort of raspingly Italian exhaust note. It was riotously entertaining. Fiat must build this car, I thought, because impecunious petrolheads will love it.

Then nothing. Nothing. Just the memory of the feeble Seicento Sporting and the fear of an opportunity missed. But now, at last, that putative Panda Sporting is here, except it’s different and it’s better. It has the 1.4-litre, 16-valve engine with six-speed gearbox from the new Grande Punto, with power raised from 94 to 99bhp (100PS), plus bigger front brakes from the same source, rear discs from the Panda 4x4 and a number of suspension changes.

The idea, according to the Panda’s engineering chief, Lorenzo Baroso, was to make the 100 HP a sporty car but also a safe and stable one, and to do that with minimal hardware changes. So the springs are 25 per cent stiffer and lower the ride height by 25mm, the front anti-roll bar is thicker (there’s no rear one), and all the suspension’s bump-stops are longer and have been made out of Cellasto polymer instead of rubber. They come into play sooner, effectively stiffening the springs further during big wheel movements.

Tyres are 195/45s on handsome 15in alloy wheels, and the body is sported-up with deeper front and rear valances featuring a fiercer front grille and a pretend rear diffuser. Black wheelarch lips are joined by thicker sills, the tailgate gets a neat little blade spoiler sat on two supports, and dark-tinted rear windows give – almost inconceivably – a kind of coupe look. The roof rails have gone, obviously.

Inside we find a leather-rimmed steering wheel, firmly-bolstered seats and an air of dark-grey seriousness far removed from mainstream Pandas’ airy levity. All is solid and neatly designed, if short of surface softness (it’s based on a very cheap car, after all); air-con, electric windows and a CD player are all present and correct. Which means the Panda 100 HP has all you could reasonably need.

Oh yes, and it also has a Sport button in place of the regular Panda’s City button. Press this, and instead of the steering’s electric power assistance becoming stronger, it eases off by 20 per cent. At the same time the throttle response below 3000rpm is sharpened.

I’m back at Balocco to try the 100 HP, and I’m bonding with it almost as soon as I move off, thanks to that keen throttle (even when unSported) and an eager induction rasp redolent of souped-up Fiat 128s of decades past. The engine sweeps up to 7000rpm before a soft limiter intervenes, but there’s no step in the power delivery, just smooth progression right through.

The shortish-geared, easy-shifting six-speed ’box helps make the most of it, so the 100 HP feels livelier than its 9.5sec 0-62mph time suggests, but the best bit is the Panda’s total transparency and complete forgiveness in the corners. The steering might be electric but the feel is entirely credible, letting you know exactly how little understeer is building under those fat Goodyears.

Pile hard into a bend, lift off late, and the non-switchable ESP nips the tail-swing in the bud. It also quells any three-wheeling antics. This is a shame in some ways, but it also keeps things quick and tidy, especially if you switch off the ASR traction control to keep the power on the boil. The traction is pretty good, actually, so you don’t end up spinning all the power away as you flick flatly and joyfully from bend to bend. The 100 HP even rides with some civility, being a little softer than that extreme prototype.