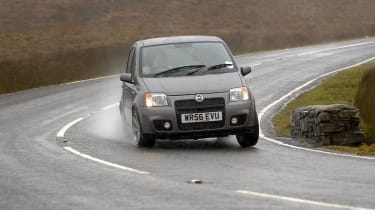 Ten grand doesn’t get you much in the new car market these days. It’s been a while since Fiestas dipped under that mark and even Ford’s personality-free Ka+ is on the wrong side of £11k. Instead, £10k car buyers are looking at basic city cars: Renault’s Twingo, Kia’s Picanto, and Fiat’s Panda.

It was as close as Fiat got to an Abarth model before the Abarth brand was officially revived a year later to denote proper performance cars in the Fiat range. Inexpensive back then and a firm evo favourite, the Panda 100HP is an absolute bargain today.

The Fiat Panda is perhaps still best known in its original Giorgetto Giugiaro-penned form. What you may not have known is that Fiat continued producing the little box right up until 2003 – when it was replaced by the second-generation car, built in Fiat’s Tychy plant in Poland.

The 2003 mk2 Panda was something of a revelation for the company. Not only did it revive Fiat’s flagging fortunes at the time, selling in huge numbers across Europe (in total, Fiat built more than two million in nine years of production), but it marked a huge step up in quality for the brand too.

What the Panda range didn’t have, until 2006, was a performance variant. The short-lived Sporting revived a badge seen on Fiat’s Seicento but its sole 1.3-litre diesel engine option didn’t really live up to the name. To make a truly sporting Panda, Fiat instead did what it had done with its previous Sporting models: raid the Punto parts bin for a larger engine. 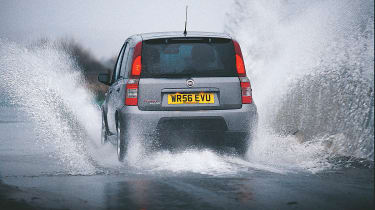 The result was a 1.4-litre version of the long running ‘FIRE’ series of overhead-cam engines, tuned in its new application to 99bhp – 100PS, lending the Panda its name. A six-speed manual transmission was also fitted, along with disc brakes on all four wheels (other Pandas used rear drums) and lowered, uprated suspension with 15-inch alloy wheels. A ‘Sport’ mode, which replaced the regular Panda’s lighter-steering ‘City’ mode, reduced steering assistance and improved low-end throttle response.

Fiat nailed the look, turning the already neatly-styled Panda into a proper hot hatch, its wider-track wheels and tyres filling the black plastic arches, deletion of the roof rails giving the car a lower profile and an almost Audi-style deep grille beefing up the front end. At the rear a cheeky diffuser-style insert and small rear spoiler completed the look, along with darkened glass for all the rear windows. An optional ‘Pandamonium’ pack added Abarth-style side stripes, a darker metallic finish to the wheels, silver mirror caps and red brake calipers.

Inside was a subtle evolution too from the standard Panda. While clothed in a predominantly dark colour scheme (a contrast to more colourful basic Pandas) the 100HP got well bolstered sports seats, silver trim highlights for the climate control system and the six-speed gearknob, and a leather-wrapped steering wheel. 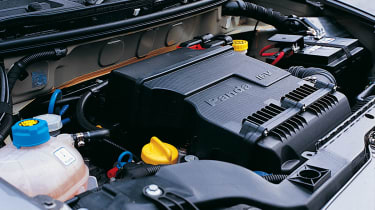 It was on the road where the 100HP shone however. Well, provided your chosen road was relatively smooth, as Fiat’s suspension tweaks delivered an uncompromising ride that could quite easily see wheels leaving the road surface when the going got tough. If the tyres remained in touch though it was great, with plenty of grip, minimal body roll and darty steering giving the Panda an old-school, chuckable feel. It was small too – smaller than the current Panda and that’s hardly a giant – which resulted in a feeling that your lane was twice as wide.

The engine played its part too. While the 6500rpm red line doesn’t seem that high you were inclined to keep it up there thanks to the 1.4’s revvy nature and the snappy, short ratios of the six-speed ‘box. For a car with only 99bhp, the 9.5sec 0-62mph sprint wasn’t so bad, and the tiny size helped play the usual small-car trick of making the Panda feel quicker than it actually was.

The £9995 entry price eventually crept up, but never by much, and the Panda continued to be one of the most fun and appealing small cars on sale until it was quietly dropped in 2010. 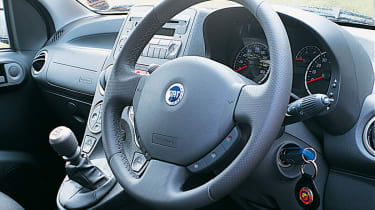 These days 100HPs can be found for less than £2000 and not much more for the very best examples. The firm ride can be mitigated with quality aftermarket springs and dampers. At more than a decade old now trim can be on its way out – it’s an inherently cheap city car, so the plastics and even leather parts won’t last forever.

You’ll need to keep an eye on coolant and on oil too and when we covered 100HP buying in detail, we noted that timing belts should be checked every 36,000 miles (and replaced every five years irrespective of mileage). The electric power steering can fail, and the cars are sensitive to tracking adjustments, potentially eating through tyres if it’s out of whack. But generally, the 100HP is a solid car – and given it’s available so inexpensively, any money you save can go towards good tyres, tracking, suspension tweaks and general maintenance. 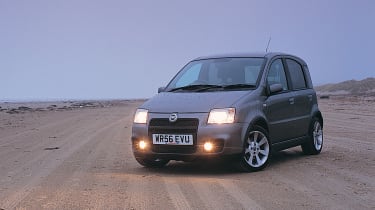 ‘Like all the best front-wheel drive cars, the Panda 100HP works even when driven beyond the limit of its tyres. The attractive alloy rims may only be 15in in diameter, but they wear chunky 195/45 R15 Goodyear Eagle F1s that deliver prodigious grip, which eventually let go in a progressive fashion. It’s when these baby gumballs yield to lateral g that the Panda shines brightest, digging harder for purchase and continuing to deliver drive even when the nose begins to slide.

‘Composed and predictable, not only does the Panda carry great speed into the heart of a corner, but it also has enough in reserve to enable you to get back on the power good and early, which keeps the eager 1.4-litre engine simmering away nicely… the polished way in which the Panda makes use of what it has is clear for even the most blinkered car-snob to see.’

‘The Panda 100HP feels as though it has been built light for speed, its little engine has character, and it revs up to and beyond a natural peak. But, boy, you have to throw plenty of gearshifts at it to keep it on the boil and maintain a decent pace. Small, narrow and upright, and occasionally bouncy over big bumps, it’s fun to hustle the little Fiat along, clinging to the wheel and preserving momentum wherever possible.’ 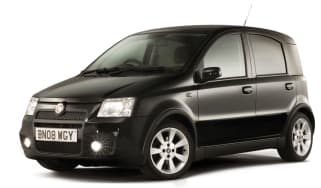 Fun, funky and economical, this fabulous little Fiat is also an absolute bargain secondhand. We help you find a good example
Visit/long-term-tests/8687/fiat-panda-100hp 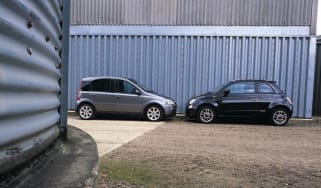 Richard Meaden's reunited with the Panda the same week Fiat's 500 becomes available. How do they compare?
Skip to HeaderSkip to Content