Richard Meaden's reunited with the Panda the same week Fiat's 500 becomes available. How do they compare? 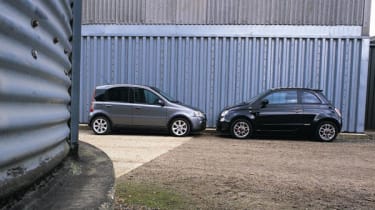 Thanks to a crazy schedule, I’ve spent more time in Colorado, Russia, Mongolia, Spain and at Silverstone’s GP circuit than behind the wheel of the Panda in the last few months. Funny, then, that I should be reunited with the plucky little Fiat the very same week we’re granted an early taste of the much-lauded and feverishly anticipated Fiat 500. As both cars share the same basic underpinnings, a comparison is as revealing as it is inevitable.

From the moment the 500 arrives in the car park it’s clear that this retro-inspired model is a born attention-seeker. Viewed in isolation the new 500’s shameless aping of its iconic forebear’s endearing proportions is convincing, but when parked amongst other cars it’s clear that the new 500 is a big and rather bulbous machine. The details are exaggerated and the wheels look too small. To my eye at least, the Panda’s clean, original lines look far sharper and more pleasing.

The 500’s interior is similarly eye-catching, at least at first glance, with high-gloss panels and an intriguing tacho within a speedo, which sees a pair of stubby needles racing around the dial. Unfortunately there are also some pretty cheap and nasty plastics, and some of the fit and finish doesn’t seem as good as the Panda’s. Perhaps most disappointingly, the 500 doesn’t share the Panda 100HP’s immediacy and zest. From the moment you pull away it feels soft and subdued, the six-speed gearshift lacking the snappy precision I’ve come to love, the formerly waspish engine feeling a little swamped and a lot sanitised. It feels less wieldy too, which is a real shame as the Panda is an absolute demon in traffic and at snicking into the tightest parking spaces. In fact, the only area in which the 500 trumps the Panda 100HP is, somewhat predictably, ride comfort, which is far more compliant and speed hump-friendly. Oh, and there’s a bit more luggage space, but rear headroom is compromised.

I warmed to the 500 after a day or so of mixed driving, but I never really felt inclined to hustle it along. It makes decent progress but never eggs you on, and there’s little sense of connection, no true bond, between you and the car. The contrast between this and my subsequent time in the Panda is stark, for since reclaiming the keys I’ve absolutely caned the poor thing’s socks off at every opportunity. You wouldn’t have the Panda down as a licence-loser, but the 100HP’s relentlessly up-for-it character makes it almost impossible to drive slowly.

I’ve no doubt Fiat and Abarth can give the 500 some teeth and beef up the looks with some chunky rims and a more ground-hugging stance. The real shame is that it’ll take a lot more power (and therefore a much higher price) to make the 500 into a drivers’ car, pushing it into Mini Cooper S territory. Then again, when the Panda’s got the bottom rung of the hot-hatch ladder so convincingly covered, you can’t blame Fiat for chasing some of the Mini’s cash-rich customers.