Richard Meaden really enjoyed the Fiat Panda 100HP he drove a couple of months ago. In fact he liked it so much he persuaded Harry to add it to the fleet 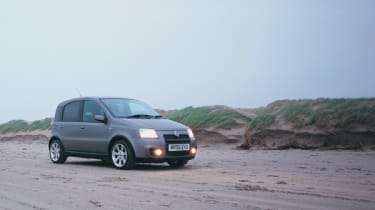 When it came to organising our ‘£10K Heroes’ cover story for issue 101, we knew it was going to be a struggle to get all the cars together. What we didn’t foresee was that it would be the little Fiat Panda 100HP that would prove the most elusive.

After exhausting every avenue with Fiat UK, who had no press cars available, and Fiat in Italy, who had a car but obviously not in England, we had all but given up hope of securing one for our big story. In desperation Harry spent the Saturday before the test scouring the nation’s Fiat dealers, only to find one virtually on his doorstep. One flash of his Bank of Metcalfe card and the test was back on track.

In truth the plan was to sell the Panda immediately after the test, but the plucky Fiat made such a positive impression on us (and me in particular) that H was persuaded to hang on to it for a while. And with the Mustang about to go up for sale and the other evo staffers already served with Fast Fleet wheels, I was the lucky recipient of RG56 EVU.

It might seem odd going from a 4.6-litre, eight-cylinder, 370bhp coupe to a 1.6-litre, four-cylinder, 100bhp hatchback, but I for one am extremely happy with the swap, and my carbon conscience has never been clearer. So, what’s life like with the Panda? In a word: fun.

The Mustang was never a car you simply hopped in and drove. It always required you to think and never flattered your driving. Consequently although it was regularly used to nip off for that forgotten pint of milk or newspaper, it was always a bit of an effort. In the Fiat you don’t think twice, thanks to its light controls, perky power delivery and minimal size. As an everyday car, it excels.

‘But what about long journeys?’ people ask. ‘Isn’t it a bit buzzy, a bit like hard work?’ While it’s true to say the Panda isn’t exactly a hushed mile-eater, it is a lot more adept than you’d think on the motorway. Regular runs down to Heathrow, Stansted or Gatwick are never a pleasure, but the Fiat cuts along at a worryingly rapid rate, and seems happiest at anywhere between 80 and 90mph. Good job EVU is sprayed a suitably stealthy shade of grey.

With any new long-termer I like to compile a list of likes and dislikes. For the Panda there’s currently plenty in the former category and very little in the latter. While its outputs are modest, the 100HP’s engine is a real gem: free-revving, smooth and reasonably easy on the ear. It’s economical too, refusing to drop below 34mpg when thraped, and returning closer to 40mpg with sympathetic use. Compared with the Mustang’s regular sub-20mpg ‘economy’ it seems miraculous.

With Sport mode engaged (it soon becomes the default setting), there’s plenty of early throttle response, and the steering has decent weight and feel. There’s always tons of grip, in the wet or the dry, although it does like to spin up an inside wheel through damp second-gear corners. It’s a sign that the front end is a bit too stiff, but somehow the scrabbling encourages me to chuck the Panda around even more. Its enthusiasm is infectious.

The gearbox also continues to impress, both for its well-chosen ratios and for its incredibly rapid shift action. With an obvious torque disadvantage compared with the bigger and often turbocharged diesel traffic around you, the Fiat needs to be kept on the boil, but the snappy six-speeder never lets you down.

The driving position is a little too upright – the steering wheel could do with coming out and down more, while the seat is mounted too high – but it’s not too bad for someone of sub-six-foot stature. The interior is solid and stylish, and as we noted in the original test it’s a great piece of functional design. The interior is also roomy enough to carry four adults on a reasonably long trip. However, the tall, thin luggage space, while okay for shopping bags, is too small for a big suitcase, requiring you to use the back seats or fold them down.

The biggest gripe is the ride quality, but oddly it’s not something that bothers me when I’m driving on my own. Having owned an original Mini, I’m inured to a bouncy-bouncy-bouncy ride, and the Panda certainly pogos along bumpy B-roads. When you’re on your own you grit your teeth, hang on to the steering wheel and get on with it, wearing a slightly demented smile for good measure, but with a passenger up front, their flapping limbs and winded expression act as a constant reminder that the Panda serves up a selfish kind of fun. The answer to life with the 100HP? Take no passengers, and definitely take no prisoners.