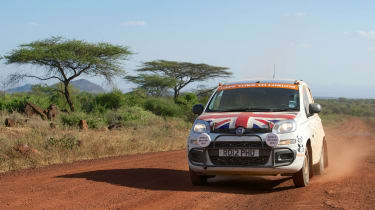 After a gruelling ten day road trip through some of the most dangerous parts of Africa, serial long distance classic rally organiser Philip Young and Paul Brace of Eagle E-Types have successfully beaten the Cape Town to London road record by over a day. Unlike the original record, which was set using a Range Rover, the pair succeeded in a humble Fiat Panda TwinAir:

The record has been broken! The Panda drove under Marble Arch, London at precisely 17.28 on 11th February 2013. A new world record has now been established of 10 days 13 hours and 28 minutes for driving between Cape Town and London. A whole day less than the previous record.

Unfortunately the drive up through Europe to home wasn't quite the walk in the park we were expecting. After being diverted in Italy we then hit heavy snow in the alps and the Panda just wasn't as well equipped as all those four wheel drives that everybody round those parts seem to drive (wonder why?). Still it kept us awake and alert dealing with it. Then it was on to France and fog on the autoroutes, but we managed to make up a bit of time and were still on schedule. We rolled up to the Eurotunnel, bought our ticket and waited… and waited and were told our shuttle had been cancelled. Ah the frustration, we so badly wanted to reach Marble Arch at 5.30 and it looked as if that was slipping away, but once through the tunnel we made excellent time and arrived to be greeted by a fine crowd of family, friends and well wishes at 17.28.

There have been many ups and downs along the way, but the kindness, support and enthusiasm of the people we've met on route and those who have avidly followed us on Facebook and twitter has been fantastic and at times quite moving. At the last count £14,723.25 has been donated to Farm Africa by our brilliant supporters and is still rising.

It has been an amazing but incredibly tough adventure and we need to sleep for a while, but then…

Catch up with the reports from the record run here:

Read the report from days 7-10 here

Read the report from day 1 here