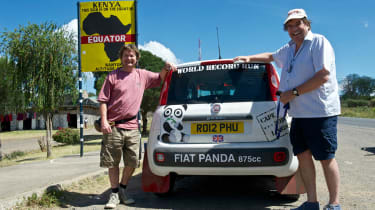 Arrived at Addis with just a quarter of a tank of fuel to find they also had no petrol, and wasted more time trying to locate some but to no avail. It seems that there is a national shortage.  What to do? We still had nearly 200km to get to the border into Sudan but the gauge was telling us there was only enough petrol for 150km. We decided there was no choice but to go for it, on went the eco button and a very tense night was spent coasting down hills, believing we may well have lost the chance to beat the record on something as simple as running out of petrol.

It was with enormous relief that we arrived at the border, running on fumes. At 9.30am it was slightly later than schedule, but... WE GOT THERE. Spent the day trying to get back on schedule. After leaving Khartoum we drove north along the Nile heading for Wadi Halfa 900km away. There was a strong north easterly wind blowing a sand storm and literally sand blasting the Panda, will we have any paint left? We still haven't changed the shock absorbers and are bouncing around all over the place. Next worry - will the new - and never before used - border crossing from Qustul across Lake Nasser to Abu Simbel involving an army barge actually happen? Looks like it might...

In Egypt now, and we are the first people to have the gates opened on this land border between Egypt and Sudan and have just made history. The Sudanese officials drove with us from Wadi Halfa (with stamps in their uniform pockets) and stamped the passports and carnet on the bonnet of the panda at 6.00am in the pitch black. We are on the military barge and the ropes were hauled 10 minutes before dawn so we are now as ahead of schedule as we possibly could be. We are fully refuelled so, assuming immigration and customs goes ok in Abul Simbel, we are in very good shape. Just got to try and grab an hour of kip before we hit port.

Read the report from day 5 here