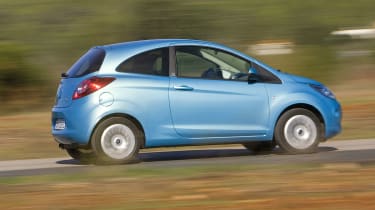 Could this be the cheapest way of having genuine fun in a new car? That’s the idea, in which case the new Ford Ka carries on where the old one, replicated 1.4 million times in its 12 years, left off.

The re-make is the same length as the original but 4in taller, with an outline rather like a Fiat 500’s. That’s because under the skin it is indeed the Fiat; it even emerges from the same small-car factory in Tychy, Poland.

Inside, you’ll find Fiat stalks and a 500-mirroring disposition of dials and switches, but the style is entirely Ford. Outside, Ford’s trapezoidal nose design has morphed to make a sort of face, while the shape of the side windows and the tail reprise the previous Ka.

Fine. But the Fiat 500, Abarth excepted, is not the rousing drive it should be, and that bodes badly for the Ka. Except that Ford has made the suspension work properly by making the springs 30 per cent softer, re-tuning the dampers to suit and adding a hefty rear anti-roll bar to increase the torsion beam’s roll stiffness by a massive 70 per cent, to the benefit of pointability. At the front the anti-roll-bar bushes are softer, the steering column’s universal joints have been repositioned to give a more linear steering response and the electric power steering has been recalibrated to improve on-centre feel.

It’s a transformation that Fiat would do well to emulate. Like the original Ka, this one is supple over bumps yet crisp in its response to commands. The steering lacks the transparency found in the old Ka, but at this end of the market it’s the price you pay for an electric system’s economy benefits.

Engines are a 68bhp 1.2 and a 74bhp diesel 1.3, both by Fiat. I tried the petrol one that most will buy, and while hardly rapid it feels quite keen thanks to Ford’s sharpened throttle mapping. In the end, though, this Ka isn’t quite the entertainer that the old one was, and sadly there’ll be no SportKa this time, but if I owned a 500 I’d seriously consider buying a set of Ka suspension bits from the local Ford agent. 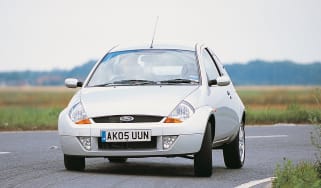 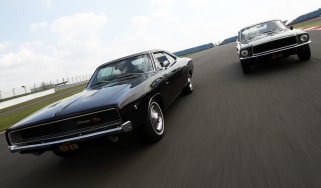 The Silverstone Classic is to celebrate the legendary Ford Mustang’s 50th Birthday, including a Homage to Bullitt. Details and video here
Visit/ford/ka/14168/ford-ka-v-citroen-c1-v-fiat-500-v-chevrolet-matiz 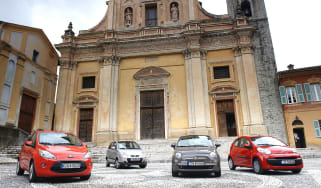 They’re the most fun you can have on four (and sometimes just three) wheels, but which budget hire should you rent?
Visit/ford/ka/9493/ford-ka-prices 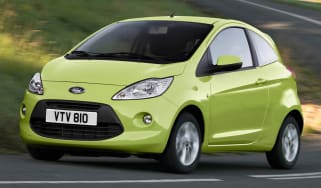 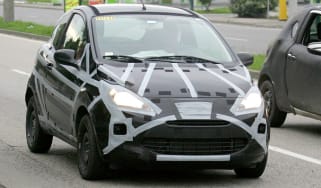 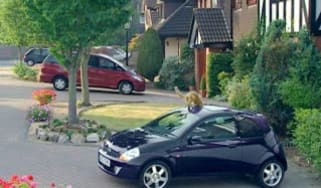 Yes it's an oldie but it's still a goodie: the classic Ford SportKa viral ad. Cat-lovers close your eyes!
Skip to HeaderSkip to Content