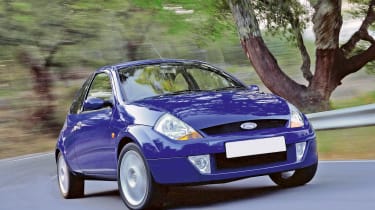 The warm reception to Volkswagen’s new Up GTI is as much down to its near-uniqueness in the market as it is any talents of the car itself. Put simply, affordable, compact fun cars are few and far between these days.

It wasn’t always this way. From the late 90s to the late 2010s the market was awash with such cars, from hot Peugeot 106s and Saxos through the Lupo GTI, Suzuki Ignis and Swift Sports, the Yaris T-Sport, the Citroen C2 GT and even a fizzy Nissan Micra, in the shape of the 160SR. And who could forget the Fiat Panda 100HP?

Then there’s the Ford SportKa. An amalgamation of shopping trolley, concept car styling cues and selected bits from Ford’s excellent Puma, it became one of our favourite tiny hatchbacks of the era, delivering fantastic fun for a modest price. 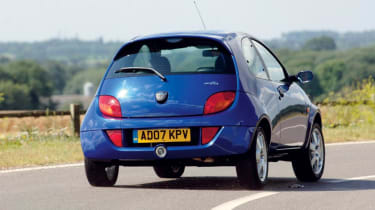 The SportKa was a beneficiary of Ford’s transition from peddler of dreary fleet cars in the 1980s to a builder of genuinely entertaining family hatchbacks through the 1990s. The transition is often credited to the hiring of engineer Richard Parry-Jones, whose early efforts can be seen in the way the Fiesta went from an also-ran as a Mk3 to class-leader as a Mk4 in handling terms, and the front-drive Mondeo coming out of nowhere to become one of the best-driving cars in its class in 1993.

The Fiesta’s improvements also helped spawn both the 1996 Ka and the 1997 Puma. While the Puma became a darling of road testers everywhere in the late 90s, the Ka was perhaps even more impressive. Its planned two-stroke engine never materialised, instead getting a pushrod 1.3-litre four dubbed Endura-E, but the chassis - fairly basic, with MacPherson struts at the front and a coil-suspended torsion bar at the rear - sparkled in a way few small cars did, save the original Mini, which was still on sale at the time.

But that 59bhp four-pot hobbled it in performance terms, taking over 14 seconds to reach 60mph. It would be 2003 before that situation was rectified, when the introduction of the convertible StreetKa - built by Pininfarina but originally styled and revealed as a concept by Ghia - and corresponding tin-topped SportKa also brought a 94bhp, 100lb ft 1.6-litre four-cylinder.

94bhp isn’t a lot, but with 50 per cent more power than the original Ka there was now enough brawn to properly exploit the much-altered chassis. The front track grew by 22mm (under extended arches, like the StreetKa), wishbone bushes were stiffened, extra bracing was added, the suspension dropped by 14mm over 16-inch wheels and the anti-roll bar stiffened by 60 per cent (with the rear torsion beam stiffened 45 per cent).

The SportKa also got a few Puma bits, including the slick-shifting five-speed transmission and the Puma’s front strut top mounts. Plenty was done to reduce friction in the steering rack too; all this work seems remarkable considering it was being enacted on a cheap supermini, but the result was evo through and through.

While the engine remained relatively low-tech even by the standards of the day, it delivered a rorty note and great throttle response, allowing the SportKa to sprint to 62mph in 9.7sec and finally crest 100mph, with a 108mph max. The steering was fantastic, the gearshift sweet and the handling thoroughly entertaining. Given that SportKas are currently astonishingly cheap (albeit frequently rusty), it’s well worth a look if you’re after evo fun on a budget.

‘We’re on the Col de Vence, tumbling downhill, some bends tightening just beyond the sight-line. Easing off the power just tucks the nose in a little more, by exactly the amount eased off. There’s no momentous build-up of yaw forces; we’re not into pulse-pounding lift-off oversteer here. I can’t think of a supermini with cleaner, purer, more involving handling.

‘The engine has the sort of crisp, gutsy throttle response that made the old Mini feel quicker than it was, and it still sounds Ford-ish even though it’s an all-new design. Funny thing, aural DNA. True, max speed is just 108mph. And standstill to 62mph takes almost ten seconds. Take it from me, though: you’ll enjoy every one of them.’

‘The front feels alert, constantly awake to small movements, and as you head for the apex you’re sure that it will dominate the handling. Lean harder on the front tyres, however, and the strange two-spoke steering wheel lightens fractionally in your hands as it telegraphs that you’ve broached the limit. Lift of the throttle now and you discover the wheels behind you were just waiting to join in the fun. 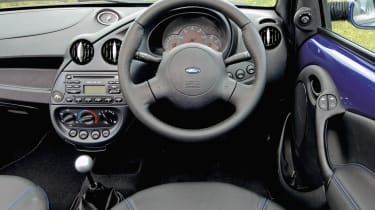 ‘It’s shot through with genuine driver appeal. It’s summed-up by the interior’s one redeeming feature - a small, silver bauble. It sits on top of a slender black wand that controls the wonderful short-throw gearshift and the sphere fits the cup of your palm perfectly, adding a delectably tactile zenith which the Micra, for all its electronic toys, lacks.’