Overlooked next to the 205 GTi, the Peugeot 106 GTi is nevertheless one of the all-time great hot hatches 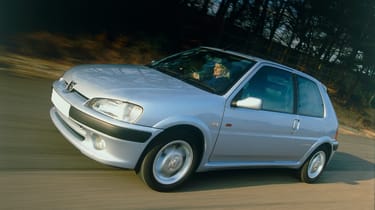 Folklore might place the Peugeot 205 GTi as the French brand’s crowning hot hatch achievement, but there’s a strong case to be made for the tiny 106 GTi too.

Tiny, pert, and blessed with one of the best front-wheel drive chassis of its era, the 106 GTi and larger 306 GTi dominated 1990s hot hatch group tests until Renault Sport got into its stride with a string of hot Clios, and while the 306 was the better all-rounder, the 106 was arguably more fun. Its reputation has been cemented by the string of Peugeot duffers that followed - ended only recently, thanks to the 208 GTi.

Today these cars are as fun as they ever were and are already moving upwards in price - so now is the time to buy, if you want to get into one of Peugeot’s greatest ever hot hatchbacks. 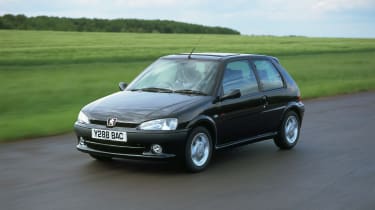 The 106 line made its debut in 1991 but it wasn’t until the phase two models arrived in 1996 that a GTi-badged model arrived. Sure, there had been brisk 106s beforehand - the pre-facelift car enjoyed XSi and Rallye versions (and the latter remains one of our favourite classic hot hatches) - but the GTi, priced at £12,835 in 1997, was hottest of all.

Peugeot managed to squeeze a full 1.6 litres under the bonnet, the TU5J4 unit boasting a double overhead cam 16-valve head. This allowed for a peak power figure of 120bhp, and a stout 107lb ft of torque. A five-speed manual transmission handled drive to the front wheels. Front suspension was by MacPherson struts linked by an anti-roll bar, while trailing arms, a torsion bar and another anti-roll bar suspended the back half of the car - all typical Peugeot hot hatch stuff.

A kerb weight of 950kg is nothing special for a car as small as the 106, but it endowed the GTi with a respectable power-to-weight ratio - higher than that of the 1.8-litre turbocharged Volkswagen Golf Mk4 GTI. As such, it sprinted to 60mph in only 7.4 seconds and only narrowly avoided hitting 130mph. 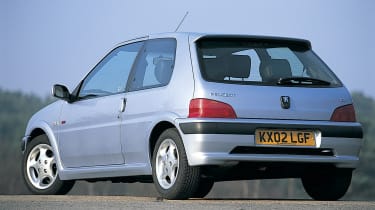 Visually, 106 GTis were distinguished by new front and rear bumpers (with round fog lights at the front), a set of wheel arch extensions, and a set of pretty 14-inch alloy wheels wrapped in 185/55 rubber. Inside there was little to truly distinguish the GTi (Rallye models were more overt in their sporting intent), though the cloth seats of earlier cars made way for leather and Alcantara items in phase 2 cars, as well as white-faced instrument dials. The easiest way to distinguish one of these later models is the deletion of the plastic side rubbing strips.

Peugeot ceased production of the 106 GTi in 2003, by which time the hot hatch market had moved on, with a proliferation of 200bhp+ turbocharged models and high-rev screamers like the Honda Civic Type R.

Worth a mention is the 106 Rallye. Other than being a 106 it's not really related to the GTi, but you might consider one as an alternative. Pre-facelift Rallyes used a 1.3-litre four-cylinder, but later cars (those the same shape as the GTi) got a slightly easier-going 1.6-litre, albeit with eight valves to the GTi's 16.

A basic equipment tally and a focus on removing weight cut almost 100kg from the weight of the GTI, at only 865kg. While not as quick as the GTi, to some the basic feel - and lack of power assistance for the steering - makes them even more rewarding to drive quickly. 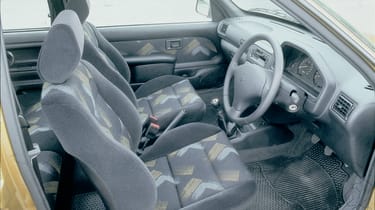 ‘Unsurprisingly, the 106 GTi feels just as strong [as the Citroen Saxo VTS] when your right foot is deep in the carpet. The brakes are equally excellent on both cars, with more than enough stopping ability to cope with their straight-line speed and the sensitivity to match the precision of their chassis. However, point the 106 down the same stretch of road and Peugeot’s intimate understanding of what makes fast front-drive cars tick shines through.

‘For starters, there’s more feel through the chunky steering wheel, and the front-end responds more progressively to your inputs. It’s still sharp, but the way it peels into a corner is more measured and easier to judge. The front and rear ends complement each other rather than conflict, with just enough dynamic instability in the tail to be able to get the car turned in with a mild lift of the throttle. The real genius is being able to engineer this into the chassis while retaining enough composure for it not to upset the overall balance.’ 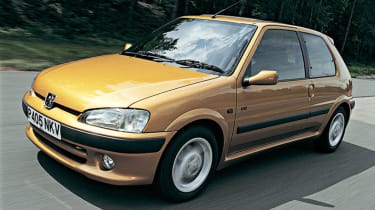