What to check for when buying a Peugeot 106 Rallye. 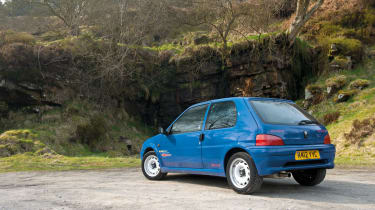 The Rallye is a proper homologation special. The original 1.3-litre version, launched in 1993, was designed for sub-1400cc international rallying. Around 1000 road versions came to the UK. The S2 had a tuned version of the 1.6-litre 8v engine from the 106 1.6 XSi. Just 500 came to the UK between 1997 and 1998, although production continued in France until 2000. Later 16v versions weren’t officially imported but some UK cars have been converted.

Again, don’t be alarmed by small amounts of rust, and some cars will have had resprays – not necessarily a bad sign, provided it’s not a cheap blow-over. Bushes on lower wishbones and engine mounts prone to wear. Check for oil leaks from head gaskets and rear of head. Gears can be stiff when cold; a slightly loose, sloppy change is not unusual. An HPI check is worthwhile given the nature of these cars.

* Insurance based on a 21-year-old male, two years’ NCD, living in Stamford, office worker, no accidents or convictions. Quotes from Adrian Flux (adrianflux.co.uk). 106 quote is for standard car (add £15 for modified)

** Fuel cost based on official ‘combined’ mpg and unleaded at 141.03p per litre