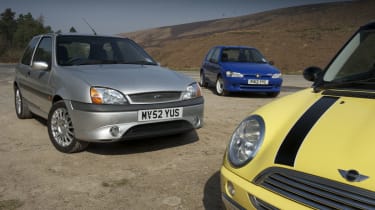 Meaden had warned me to pack ear-defenders; I’m beginning to think he wasn’t joking. I’m on the M1 heading north in his 106 Rallye and the period MiniDisc player has long since been overwhelmed by the all-conquering boom of the aftermarket exhaust, the 1.6-litre engine thrumming at almost 4000rpm at an indicated 80. I have to confess it’s been a while since I’ve driven anything quite so raw and basic as this little Pug. No aircon of course; no airbags either for that matter. This late-‘90s Rallye doesn’t even have power steering, as my forearms are about to discover.

What it does have, though, is an indomitable spirit, the means to get you totally wrapped up in the whole business of driving, and a solid four evo stars (or four and a half stars in the case of the earlier 1.3-litre version, which is even more effervescent – so long as you’re prepared to rev the nuts off it).

The other cars currently homing in on our rendezvous point in the Peak District – the Fiesta Zetec-S and the Mini Cooper, both children of the early Noughties – were awarded a similarly high tally of evo stars back in their day. And although you can now pick them up for a fraction of their original cost, they all remain proper drivers’ cars. One of them just shouts about it a little more loudly than the others…

Our three are certainly well-matched on paper. All have 1.6-litre naturally aspirated four-cylinder engines driving the front wheels through a five-speed manual gearbox. The Pug in standard form has 103bhp, just 1bhp ahead of the Ford, though Dickie’s example benefits from a lumpier cam and a remap as well as that freer-flowing exhaust, lifting power to around 125bhp. The Cooper is the most powerful in standard form with a quoted 115bhp, but it is also the heaviest, the only one to top 1000kg. So there’s very little in it; claimed 0-60 times are all within about a second of each other. On the road, however, they could hardly be more different.

Turning off the motorway, the sheer weight of the little Pug’s unassisted steering hits home at the very first roundabout – the clutch is pretty beefy too – and it’s all rather at odds with the stripped-out interior and the rorty, high-revving motor. Hauling on the wheel at low speeds, it’s suddenly a very physical car to drive. And then you accelerate onto the first open stretch of dual-carriageway, feel the power kick in at around 4000rpm and hold it all the way to 7500rpm, surprising Mondeos and A4s with the Rallye’s turn of speed. Interesting little car, this…

Heading further into the hills, as the road starts to buck and weave, the 106 comes even more into its own. The ride’s pretty pliant, though the occasional sharp ridge rattles the flimsy plastic trim, and through faster corners a rock of the shoulders locks it onto line – riding on 185/55 R14 Dunlop SP Sports there’s no shortage of grip in steady-state cornering. In the slower turns you can use the lightly loaded tail to tip the nose in, though you wouldn’t want to take too many liberties – if the rear gets too far out of line you’re going to need quick wits and forearms like Popeye to catch it. So it’s a proper challenge, the 106, but one with commensurate rewards.

The Cooper is its polar opposite. The build quality is literally from a different century, and this ten-year-old and well-used example feels almost as tight as when it left the factory. Inside, the seats are more solidly supportive that the Pug’s squishy chairs, the refinement clearly up several notches, the ergonomics properly sorted (the 106’s cramped, offset pedals are one challenge you don’t need). The BMW/Chrysler four that powered the first-gen New Mini hums sweetly, the gearchange feels precise, the clutch light and easy, the steering – mercifully – power-assisted. This one’s on the smaller 15-inch wheels with skinny 175/65 R15 Pirelli P3000s – just the way we like our Coopers!

After the rather laborious steering of the Rallye, the way the Mini’s nose darts into the turn at the merest flexing of the wrists comes as a shock even when you’re expecting it. We’re on the famous Cat and Fiddle Road between Buxton and Macclesfield, and although it’s been rather spoiled by average speed cameras in recent times, the beauty of cars like these is that you don’t have to be travelling at great speed to feel you’re pushing them to their limits. Sure enough the Mini’s soon squealing its way through the tighter turns. Like the Pug, you need to wring the engine out beyond 4000rpm to get the best from it, but it’s an easy car to hustle and you quickly build a rhythm. If it’s lacking something it’s more of the character and playfulness of the Rallye – the Mini’s handling is just a touch inert – but it’s still a cracking little entry-level evo car, and on this evidence one that wears its years well.

Blimey, but this Fiesta’s good. It’s easy to forget just what a roll Ford was on in the late 1990s and early 2000s. Original Focus, Puma, Sportka – all were far better than we really had any right to expect. And one of the sweetest of all was the mkV Fiesta Zetec-S.

Produced only between 2000 and 2002, the Zetec-S is one of those cars that has drifted slightly off the evo radar in recent times, perhaps as a result of so many having been modified, often to the detriment of the handling. Find an example as original and unmolested as evo reader John Bowman’s, however, and it’s a revelation.

Neither as chunkily modern as the Mini nor as cool as the Rallye, the Fiesta still looks subtly purposeful with its discreet spoilers, mesh grille and multi-spoke alloys shod in this case with 195/50 R15 Toyo Proxes. Inside it’s all organic curves in the Ford style of the period, and somewhere between the Mini’s solid heft and the Pug’s slightly clangy feel in terms of cabin ambience. But you only have to drive a mile down the right road to know that everything that really matters is hidden somewhere beneath you.

All the things we love about a great chassis – a supple but controlled ride, ideally geared and weighted steering, balanced grip front to rear, and a delicious flow of information from all four contact patches to tell you when those limits are being breached – are here in this small, unprepossessing Ford hatch. No, it’s not particularly quick, but the 16v Zetec engine offers a decent spread of torque, keen throttle response and a reasonably tuneful exhaust note. Every aspect of the package is so beautifully in tune with the whole.

It’s more than enough to persuade me that if I were to choose one of these cars on driving enjoyment alone, the Fiesta would be it. But you can make a strong case for any one of these three. Where Fiestas of a similar age can start to feel tired and look a bit tatty, BMW’s Mini seems to wear its miles particularly well. The Rallye is considerably rarer and the most involving – but also the most challenging – of our three. If you can’t find one with the optional power-assisted steering, the 106 GTI is well worth a look.

There’s no shortage of Fiestas to choose from (some 16,000 remain, according to howmanyleft.co.uk, compared with just 805 Rallyes, S1s and S2s combined). Find a well-cared-for, unmodified one and, for around £1500, I reckon you’ve got yourself a genuine drivers’ car at a bargain price that should also prove reliable and cheap to run. For a first evo car, that’s a lot of boxes ticked.

2) Join an owners’ club – ‘enthusiasts’ represent a lower risk to insurance companies. Discounts can be as much as 15 per cent.

4) Keep it standard. Modifications can increase the premium, though specialist brokers offer competitive modified car schemes. Make sure your insurer knows about any mods – failing to declare them could invalidate your policy.

5) Opt to pay a higher voluntary excess  – but ensure you can afford to pay the excess if you do have to make a claim!

7) Add a second driver with a good record to offset the risk.

8) An increasing number of companies offer policies based on fitting a ‘black box’ in your car. The more carefully you drive, the lower your premiums – that’s the theory. It could save you money in the long term, but compare overall costs carefully and be aware that anything deemed to be reckless driving could push your premium up.

9) Be honest with the valuation of your car – the truth is that no matter what you value your car at, insurers will only pay out the current market value.

10) If you’re a new driver, consider taking a PassPlus course. Many councils offer discounts of up to 50 per cent on the cost and some insurers offer PassPlus certificate holders discounts on their premium.With thanks to Adrian Flux (adrianflux.co.uk)