What to check for when buying a Mini Cooper. 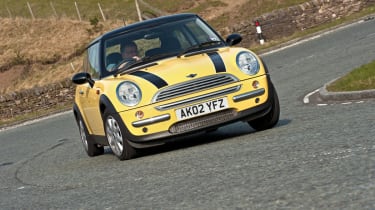 BMW’s Mini arrived in 2001 in sporty Cooper and basic One variations, sharing the same 1.6-litre Brazilian-built Tritec engine co-developed by BMW and Chrysler. Popular options were the Pepper and Chili packs, which added extra equipment, including bigger 16in wheels and stiffer suspension in the case of the Chili pack, though many prefer the car on standard 15in wheels. In August 2002 the supercharged Cooper S version arrived with 161bhp – but also substantially higher insurance costs.

The earliest Coopers have now dropped below £3000 and there’s no particular reason to be wary of these cars. £3500, however, gives you a huge choice.

Early cars had a few recalls, including ‘static discharge fire risk’ and a front suspension upgrade, so gen-up on what to check for in the service history. A rattle from the engine may mean a stretched timing chain. Electric steering cooling fans often fail, and clutches tend to last around 50K miles. On early cars check the front carpets for damp – it can lead to expensive electrical problems.

* Insurance based on a 21-year-old male, two years’ NCD, living in Stamford, office worker, no accidents or convictions. Quotes from Adrian Flux (adrianflux.co.uk). 106 quote is for standard car (add £15 for modified)

** Fuel cost based on official ‘combined’ mpg and unleaded at 141.03p per litre