New Ford Focus RS Edition review – does a diff make all the difference? 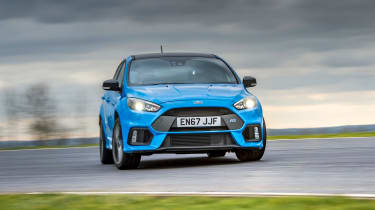 When the Ford Focus RS arrived in 2016 it set a new hyper hatch standard, putting the less powerful VW Golf R and much more expensive Audi RS3 in the shade. However, since then, the arrival of cars such as the latest Honda Civic Type-R (FK8) has highlighted the flaws of the characterful Ford Focus RS and demoted it a few places down the pecking order. In response, and as a last hurrah for this RS, Ford has released its limited run Edition models, which pack a number of visual changes, plus the addition of a Quaife limited slip differential for the front axle. It doesn’t sound like a lot, but the latter item helps transform the car.

In all other respects, the Edition is identical to the standard Ford Focus RS. That means the same 345bhp 2.3-litre four-cylinder engine that’s mated to a six-speed manual gearbox and four-wheel drive transmission. This is GKN’s trick torque-vectoring set-up that features the headline-grabbing ‘Drift’ mode.

Visually the RS Edition is identified by its bold paint colours, plus the matt black finish used on the roof, tailgate spoiler and door mirror housings. Other changes include the graphite grey 19-inch alloys that cover bright blue Brembo brake calipers. Inside, the £1145 Recaro shell front seats are standard, while carbon fibre trim covers the handbrake lever, door pulls and the surround for the three auxiliary dials mounted on the dash. Extra equipment runs to keyless entry, cruise control, privacy glass, powerfold mirrors and a heated steering wheel.

The big change to the Focus RS Edition is the addition of a Quaife limited slip differential for the front axle. Aimed at boosting stability under braking and eliminating torque steer when accelerating, it promises to tame some of the Ford’s wilder tendencies.

In all other respects, the Edition is identical to the standard RS, meaning you get the same 2.3-litre EcoBoost four-cylinder that delivers 345bhp and 357lb ft. A six-speed manual is the only gearbox option, while the four-wheel drive system is a heavily reworked GKN set-up. Featuring a ‘Twinster’ rear differential it can shuffle 70 percent of the engine’s torque to the rear axle and then 100 percent of that to an individual rear wheel, which is what allows the Focus to perform in it’s wild ‘drift’ mode. Curiously, other than in steady state driving (when the rear axle is effectively disconnected in the name of efficiency) the rear wheels actually rotate slightly faster than the fronts, which is what gives the Ford its rear-wheel drive feel through the corners.

The Ford’s turbocharged 2.3-litre four-cylinder is a development of the EcoBoost unit first seen in the Mustang. Here it develops a healthy 345bhp at 6000rpm, while peak torque of 347lb ft is generated in a flat line from 2000 to 4500rpm.

Unusually for a car with manual transmission, the Focus has launch control as standard – simply hold the accelerator flat to the floor, side step the clutch and then let the electronics and transmission do their stuff. Given that the Edition is no more powerful than the standard car it’s no surprise to find it comes with the same 4.7 seconds claim for the sprint from 0-62mph, while top speed remains the same at 166mph.

Fire the engine and there’s the same burbling exhaust note at idle and the Ford feels indecently rapid once it’s rolling and the engine has overcome the inertia inherent in a hatchback tipping the scales at nearly 1600kg. The crackling exhaust note is a bit contrived, particularly when it issues its perfectly precise barrage of pops and bangs as you lift off the throttle between gearchanges, but it all adds to the drama of a car that doesn’t make any attempt at subtly.

Owners of the standard Focus RS will feel right at home behind the wheel the Edition. For starters the hugely supportive Recaro seat is set just a little too high. Start moving and the déjà vu continues, with the firm ride causing occupants to bob along in rhythm with the road. 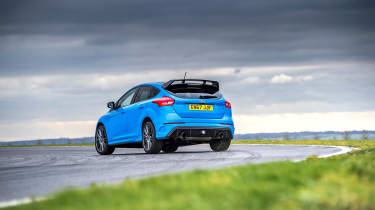 So, is there any point in paying extra for the Limited? The short answer is yes, and it’s all down to that Quaife differential. At low speed the only evidence of the new addition’s presence is a subtle tightening of the steering when you lift off the throttle as the diff shifts its loadings. Go faster and its effects are more obvious. For starters, there’s greater stability on the way into corners, the differential helping to keep the Focus arrow straight and steady, even when working those Brembo brakes hard. The steering is as meatily weighted and precise as before and there’s the same strong turn-in bite, but squeeze the throttle on the exit of a bend and you’ll discover the old car’s torque steering habit has been knocked on the head, even on bumpy and heavily crowned tarmac. Where the standard car’s nose would weave around as the four-wheel drive system frantically shuffled torque around, the Limited simply hunkers down and fires along the road.

This less wayward approach gives you confidence to more fully exploit the Ford’s unique handling balance. You can now lean hard on the RS coming out of corners and start working the rear axle to get that subtle rear-wheel drive sensation that helps point the car’s nose into the apex to allow you to get on the power earlier. Overall it gives the car a more sophisticated and polished feel, and while some drivers will miss the old car’s slightly ragged and raw character for most, the gains in precision more than make up for it.

At £36,295 the Ford Focus RS Edition is a hefty £3350 more expensive than the standard car - even if you take into account the extra kit that’s a big chunk of cash. However, so transformative is the addition of the front differential that it’s possible to justify the extra outlay, especially when you consider there will be just 500 Edition models in Nitrous Blue and only 300 in the Race Red. 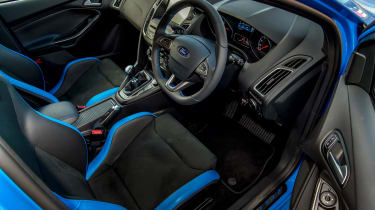 In terms of rivals, the Honda Civic Type-R is closest to the RS in its hardcore pursuit of driving thrills, but at £30,995 (£32,995 if you want sat-nav and a few other add ons) it’s considerably cheaper. It’s no slower, though, thanks to its combination of 316bhp turbocharged 2.0-litre and lower kerbweight. And while it looks even wilder than the Focus, it’s brilliantly set-up chassis has a broader bandwidth of abilities, meaning comfortable cruiser when you need it and razor sharp hatch when you feel the blood rising.

If you want four-wheel drive, then the current exemplar of the breed is the recently revised VW Golf R. In five-door manual guise it’s £33,505, but its lower price is reflected in its less meaty 306bhp power output. That said, the VW feels every bit as quick as the Ford, while its handling is poised and polished, but with just enough engagement to keep things interesting. And with a choice of bodystyles (three and five-door, plus an estate) and either manual or DSG gearboxes, there’s a Golf R for everybody.