A Fiat-Ford collaboration has resulted in Ford's new city car 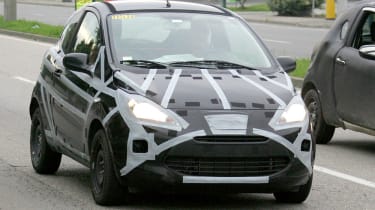 Discussions took place between Ford and Fiat at the 2005 Geneva Motor Show, centering on shared production for a joint city car product. Six months after their first meeting, at the 2005 Frankfurt Show, both manufacturers signed a co-operation contract and then, exactly two years later, the first of the twins was born: the Fiat 500 was officially launched at the 2007 Frankfurt Motor Show.

The Ka, however, was not on display. But we can show it to you anyway as our spies were lucky shooting a prototype almost without camouflage while undergoing road tests close to the firm’s headquarters in Cologne.

Both, the Fiat 500 and the new Ford Ka, will be built in Fiat’s Tychy plant in Poland.