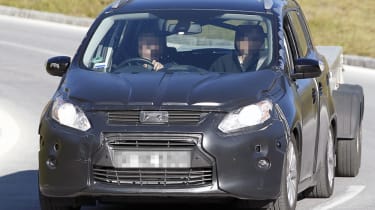 Best news, of course, is that the sliding doors will make it into production, though we reckon its centre support will be less radical compared to that of the Iosis Max concept car revealed at this year's Geneva Show. Despite its disguise, the location of the rail of the sliding door is clearly visible above the fuel filler cap. Sadly, though, we think we’ll have to expect the car featuring a solid B-pillar.

All in all the production model will be a lot bigger than the show car – but also less exciting. We’re sure to see similar engines under the bonnet than in today’s C-Max – plus a few consumption-optimized units and mabe even the 180-hp 1.6-litre EcoBoost we found in the Iosis Max. The car is scheduled to make its official debut at next year’s Paris Motor Show.