New styling, new turbo engines and a host of trick technology signal a major update for the Ford Fiesta 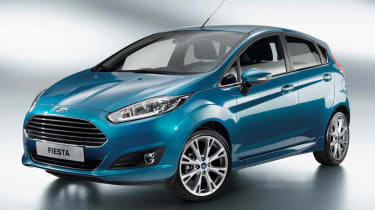 8
The 2013 Ford Fiesta is here. It’s the supermini’s first major update since the current generation’s 2008 introduction.
On the outside, it’s typical facelift fare, with new, LED running light equipped headlights, a bolder grille and the incongruously named ‘power-dome bonnet’. Otherwise, the Fiesta’s sharp styling has stayed intact, and most casual observers may struggle to spot the difference. Same goes for the interior, which remains one of the most interesting in its class.

Subscribe today to have every issue of evo delivered straight to you. You'll SAVE 39% on the shop price, and get evo for its original cover price for a whole year!
Subscribe now
Most changes are beneath the surface. Ford’s characterful three-cylinder Ecoboost engine finally makes it from Focus to Fiesta, the 1-litre turbo unit – which comes in 99bhp and 123bhp tunes (and can be wound up further by Superchips) – likely to shine in the smaller car, and create a brisk warm hatchback. Expect tax-free sub-100g/km CO2 emissions, with a non-turbocharged version, producing around 70bhp, set to follow later.
A 74bhp 1.5-litre turbodiesel also joins the new Fiesta range, which will be topped by the 178bhp, 1.6-litre Ecoboost-powered ST hot hatch.
There’s a host of new technology that debuts on the facelifted Fiesta. It keeps up with rivals via Active City Stop – a low-speed crash avoidance system – and Ford SYNC connectivity for Bluetooth and USB devices, while nosing ahead of them courtesy of MyKey. It’s an intriguing bit of tech with the parents of new drivers in mind. It allows configuring of maximum speed and audio volume limits, and is capable of locking the ESP and driver aids on. It also mutes the audio system until seatbelts are fastened.
The 2013 Fiesta will debut on Ford’s Paris motor show stand at the end of Septemeber. Sales begin on January 1 2013, with prices of the Fiesta – which is frequently the UK’s best selling car – set to change little. That means a kick-off point of around £10,000, with the Renaultsport-rivaling ST set to cost £17,000.
Follow us on TwitterFollow us on FacebookEmail us