Superchips is first to upgrade the Ford Focus 1.0 Ecoboost, taking its bhp per litre figure past the Bugatti Veyron's 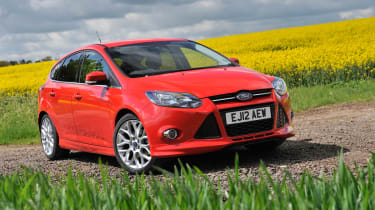 The Ford Focus Ecoboost has received its first upgrade. The Superchips ECU remap lifts the diddly 1-litre turbo three-cylinder’s power further than its already impressive 123bhp. The Superchips Focus Ecoboost produces up to 145bhp and 167lb ft of torque; respective rises of 22bhp and 42lb ft over the standard figures claimed by Ford. The claimed 56mpg fuel economy is said to be untouched, too (though we managed 41mpg when we tested the Ford Focus 1.0 Ecoboost). The extra power – which takes the Focus’s bhp-per-litre figure past the 1000bhp Bugatti Veyron’s – is yielded via rewriting of the 1-litre engine’s ignition, fuelling and boost parameters. Throttle response is improved, too. Like other Superchips upgrades, it can be applied via a Bluefin programming handset, which allows the map to be uninstalled or reinstalled any time. It can be applied to all Ford Focus Ecoboosts produced from March 2012, and costs £455. A 12-month/30,000-mile vehicle warranty is included.