Ford has fitted a tiny 1-litre turbocharged petrol engine into the Focus - but is it up to the task? 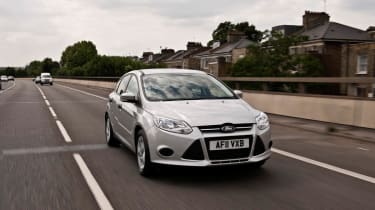 It's the most extreme example of mainstream engine downsizing yet: an engine of just 999cc to haul a Ford Focus. This tiny motor is set to replace the regular non-turbo 1.6 that used to be the Focus range's centre of gravity, producing the same 123bhp, a lot more low-end torque and dramatically improved fuel economy, in real driving as well as in the official figures. It weighs 30kg less, too.

The engine is a long-stroke three-cylinder, with direct injection, variable timing for both inlet and exhaust camshafts, and a tiny turbocharger that’s able to spin at up to an incredible 248,000rpm.

It's full of clever stuff, such as a water-cooled exhaust manifold to reduce exhaust temperatures and cut down on the need for extra doses of fuel at high loads to keep things cool and detonation-free.

The cambelt runs in oil, so it's silent and everlasting, and the cylinder head's cooling channels are divided so that initially only water from the hot, exhaust side is fed to the Focus's cabin heater and the rest of the coolant stays still for a quick warm-up.

The 'brake mean effective pressure' is the ultimate measure of engine efficiency. A naturally-aspirated engine usually measures around 150psi here (that's the peak pressure on the piston crown), a good turbo well over 200psi. This tiny EcoBoost scores an extraordinary 348psi, all from an engine whose cast-iron block is small enough to sit on a sheet of A4 paper.

It makes the lovely deep, smooth, sonorous hum typical of a three-pot, but makes remarkably little of it. Despite the lack of a balancer shaft – the flywheel and front pulley are deliberately unbalanced to achieve the same result – the engine is extremely civilised. No Focus is more refined.

There's practically no detectable turbo lag, and such is the low-end torque that the engine easily pulls the long sixth gear. There's a thrust and energy to the power delivery you just don't feel in the regular Focus 1.6.

The only downside is the lack of engine braking, partly the result of the engine's very low internal friction (it uses 0W/20 oil). That nose-weight reduction makes the steering more sensitive and the balance more neutral, making this the most agile current-generation Focus so far.

All told, the 1.0 EcoBoost-powered Focus is the best all-round car in the current range. As downsized petrol engines are the future of mainstream car powerplants, we can feel pretty good about life.

There's no comparable powertrain in a Focus rival yet, although similar designs must be on virtual drawing boards across the world. Compared with a Focus 1.6, the power is the same, the torque is greater at 125lb ft (available from just 1500rpm) against 118lb ft, and there's up to 30sec of overboost on offer with 148lb ft. There's a £250 price rise, too.

There is also a less powerful 99bhp version with a five-speed gearbox, and experiments with the engine have shown it’s able to make 180bhp with a bigger turbo. A naturally aspirated version will follow, with around 75bhp. We can expect to see the engine throughout the lower reaches of the Ford line-up, as well as the Focus it will be in the C-Max and B-Max MPVs and – although not officially confirmed yet - the Fiesta.