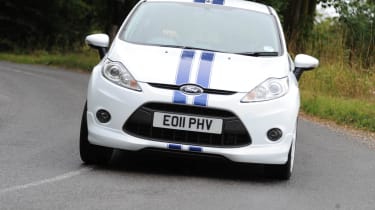 With those power hikes so subtle, the S1600 doesn’t feel worlds apart from the Zetec S, though that does still mean it’s a jolly good laugh. While those higher maximum figures are delivered a few hundred revs higher than before, this Fiesta actually feels friskier at lower engine speeds, an area it was always notably lacking. The S1600’s closer ratio gearing is the likely contributor here, and the five-speed manual transmission is more precise and satisfying than ever.

All told, it’s a more likeable upgrade than the similarly potent Mountune MP140 kit; the increased redline is reached with smooth linearity, and the engine is a delight to work hard.

The Fiesta’s combination of precise steering, composed ride and crisp handling is still crying out for an extra 50bhp or so, though, and while it’s doubtless great fun to keep the S1600’s keen little 1.6 on the boil, you’ll soon be wondering how good a time you’d be having with a bhp-count more befitting of the current small hot hatch class.

If you can live with the garish livery (you’ve a choice of white stripes on blue or vice-versa) then it’s subtly different enough to a Zetec S to warrant the extra £1500 it costs, should you crave a bit more fire in your Fiesta’s belly. The 131bhp Renaultsport Twingo Cup (£12K) and 123bhp Suzuki Swift Sport (£13K) remain rawer but more rewarding choices, though the Fiesta is the more sophisticated and practical choice.

It’s been a long time coming, but 2012 should finally see the arrival of a properly hot Ford Fiesta, with talk of an ST boasting up to 180bhp from a 1.6-litre turbocharged engine.