We drive the special edition Ford Fiesta Metal, a hotter hatchback with more power and lots of equipment 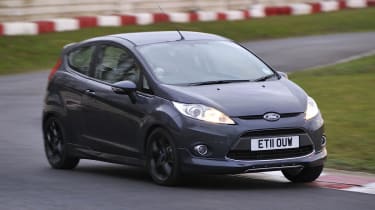 What is it? The Ford Fiesta Metal. It’s another special edition of the UK’s best selling small car, and it gains the same uprated 1.6-litre engine as 2011’s Fiesta S1600. It costs from £15,845, with the metallic Midnight Sky paint you see here a further £495. It’ll be twice as plentiful as the S1600, 1000 being made. Technical highlights? Compared to standard Fiestas, there’s lower, sports suspension and weightier power steering. And on top of the 118bhp Zetec S – the previous Fiesta range-topper – the Metal’s 1.6-litre four-pot petrol gets a new low-loss air intake set-up, an overhauled exhaust system (wider pipes, modified rear muffler internals, reduced back pressure, new chrome twin pipes) and a 300rpm increase in engine speed (to 6800rpm). It’s enough to yield 14bhp and 6lb ft rises to 132bhp and 118lb ft. There are also closer ratios for the five-speed manual gearbox.  What’s it like to drive? Just like the S1600, the Metal doesn’t provide a huge dynamic step-change from a Zetec S, but that’s no bad thing. The modestly powered Fiesta has always been one of the sweetest superminis to drive, if far from the fastest. And the small injection of extra power leads to a car that feels friskier at lower engine speeds, an area where the Zetec S noticeably lacks gusto. The Fiesta’s combination of precise steering, composed ride and crisp handling is still crying out for an extra 50bhp or so, though, and while it’s doubtless great fun to keep the Metal’s keen little 1.6 on the boil, you’ll soon be wondering how good a time you’d be having with a bhp-count more befitting of the current small hot hatch class. Luckily, a 178bhp Fiesta ST (video and pics here) arrives later this year. How does it compare? The Fiesta fights its battles in one of the toughest car markets, with the fabulous Suzuki Swift Sport and Renaultsport Twingo Cup boasting near-identical power outputs but slightly friskier driving experiences. Both are cheaper, too. The little Ford fights back with more space and equipment and much more refined road manners than the Twingo. Anything else I need to know? As well as more power, the Metal special edition also brings 17in black alloy wheels, heated leather sports seats, climate control and a subtly more butch bodykit to the Fiesta. Two other paint schemes – Panther Black and Frozen White – are also available.