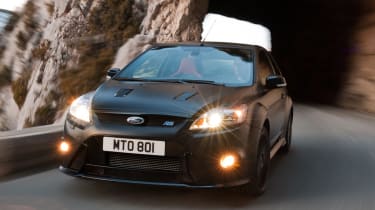 Hot on the heels of our scoop story that Ford was working on a hotter Focus RS (click here), comes the official confirmation. As we reported late last week, a limited run of 500 models will be produced to celebrate the end of Focus RS production. The car will be officially shown at the Leipzig Motor Show in Germany on 9th April. Production of the RS500 starts in May at the Saarlouis plant in Germany and is due to finish in September. 101 will be coming to the UK.

Changes are mainly limited to the engine and trim. Power for the RS500 is increased by 44bhp over the standard RS and torque also rises to 339lb ft. An improved induction package is responsible for much of power gains. Modifications include a larger intercooler and improved airflow through air box as well as a larger diameter exhaust downpipe and uprated fuel pump. Changes to the ECU software allow the RS500 to retain the emissions and fuel consumption of the standard RS.

The revisions to the RS500 allow the 0-60mph time to fall to 5.4 seconds (0.5secs faster) with big gains expected on in-gear times. Top speed is expected to remain the same at 163mph. Mechanically there are no other changes.

The Focus RS has been a big hit for Ford. Having initially only planned to build 7-8000, by the time the axe falls, over 11,000 will have left the Saarlouis faciility. Have a look at www.focusrs500.com for more info, but don't forget to check back here later in the week - Ford is promising to release further video content of the car in action. You can see the first teaser vid here

The Focus RS500 will set you back a not inconsiderable £35,250, though the full 101-car UK allocation is sold out. If you fancy a 345bhp Focus, you'll have to spec a regular RS with Mountune's upgrade...