A new version of the Focus RS gets unique red paint, black wheels and an LSD, but no extra power 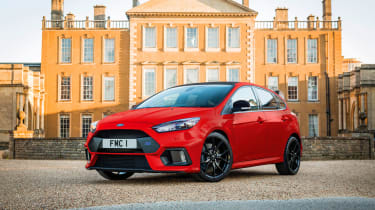 Unbelievably, as it doesn’t seem to have been around for long enough, Ford Focus RS production is nearing its end. To celebrate its all-wheel drive hot hatch, Ford has unveiled a new special version called the Race Red Edition, meaning for the first time in the UK, the Mk3 Focus RS is available in red. Production of this special edition will be limited to just 300 units and will begin in February next year. However, it is available to order right now for £36,295.

> Read our review of the current Ford Focus RS

The changes to the Race Red Editions are mostly superficial. As well as the red exterior paint, the Focus gets 19-inch black cast alloy wheels. Even though the rims look almost identical to the optional forged items available on the RS, they are in fact different. To emphasise the red and black exterior colour scheme, this special edition has a contrasting black roof, door mirrors and rear wing.

With such a noticeable colour combination, you’d think that matching red brake calipers would be an obvious choice but instead Ford has opted to paint the four-piston Brembo brakes dark grey. 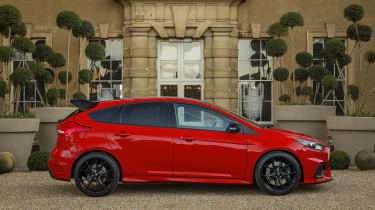 Inside, the Race Red Edition gets the half leather Recaro seats and a heated steering wheel, which are an option on the regular RS, as standard. There’s also a smattering of carbonfibre trim around the interior, too; the bezels around the auxiliary dials, the door handles and the handbrake lever are finished in the composite material.

Mechanically, the Race Red Edition is almost identical to a basic Focus RS. That means it still has the same 2.3-litre four-cylinder EcoBoost engine that puts out 345bhp and 347lb ft and a six-speed manual gearbox.

There is one change to the drivetrain over the regular Focus RS’s, however. The Race Red Edition gets a Quaife mechanical limited-slip differential for its front axle. This works in conjunction with the RS’s native four-wheel drive system that uses a pair of clutch packs in the rear differential, one for each wheel, that can distribute torque across the back axle whenever the car sees fit. The standard RS features, such as Sport, Race and Drift mode, are still available, but with an LSD helping the front axle, traction should be even more impressive than in the regular car.

If these changes sound familiar it’s because all these features, except the red paint and grey calipers, first made their appearance on the Focus RS Edition that was released earlier in the year.