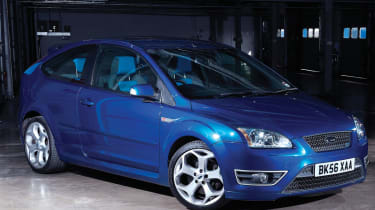 There are plenty of STs around, so if you have any doubts about a car, find another. Gary Lendon of Stockport-based ST service and tuning specialist Profile Auto Evolution warns that a standard-seeming car could well have been modified in the past. ‘Various original clips and fixings might be missing if an induction kit has been fitted, for example, and they can’t be replaced.’ Gary is our guide here.

The big one is split cylinder liners in cars made up to April 2008. ‘If there’s mayonnaise in the oil filler and a misfire on start-up, that will be the problem. It’s more likely in a modified car because of the extra stress, and was cured in later cars. The symptoms might seem like head gasket failure, but we’ve only ever had one of those compared with about 30 split liners. If it’s happened, you need a whole new engine because Ford doesn’t supply the block alone.

‘If the car sings like a kettle at idle, the diaphragm in the oil filter housing has split. It’s part of the breather system, open at idle and closed on boost. The whistle is air being pulled through the oil filler cap. Also check what the boost gauge is doing when you drive. The boost should go just over halfway, then back to half – or more if it has been ‘mapped’. If it won’t go beyond a quarter, it needs a new solenoid boost valve at £85.’

‘The early clutch is weak and can slip under mid-range torque, especially if the engine is tuned. The RS clutch is stronger so we fit that. It’s cheaper too, but you also need the RS dual-mass flywheel, thrust bearing and slave cylinder the first time it’s changed – £900 fitted for the whole job. If the driveshafts are clicking, the car might have missed the Ford recall which glued the mismatched driveshaft and CV joint splines together. We use a Loctite product to fix it. The offside driveshaft’s inner boot is prone to splitting – we fix one a week. Neglect it and you’ll need a new shaft at £380.’Suspension, brakes

‘The brakes are usually fine. The front anti-roll bar drop-links can wear quickly; listen for a clonk over bumps. The main problem is the fluid-filled rear bushes for the front wishbones, which can split and leak in as little as 12,000 miles. Wear on the tyres’ inside edges and torque steer are the giveaways. You can’t get the bushes except by buying the whole wishbone, so we fit polyurethane bushes which don’t spoil the ride.’

Check the boot is dry – some cars have missing sealant in the seam by the tailgate hinges. Gary also advises checking the washer bottle for leaks: ‘Replacing the bottle means removing the front wing to get at it. The driver’s seat base can break at the back, so make sure the seat doesn’t rock. It can be welded up again if necessary.’Specification

Parts Prices (Supplied by Plans Motorsport, Dunsfold, Surrey. Tyre prices from blackcircles.com. All prices include VAT at 20 per cent)