The 256bhp Mazda 3 MPS is still one of the most potent hatchbacks around, and now its been updated to make it sharper than ever before 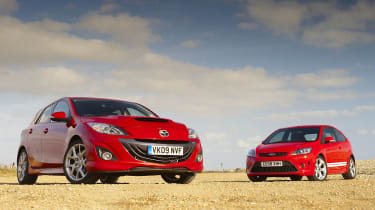 The original Mazda 3 MPS had the unusual distinction of being both a dark horse and a one-trick pony. At the time of its launch, towards the end of 2006, there wasn’t a rival that dared hurl as much power and torque at its front wheels. Indeed, the 256bhp and 280lb ft pumped out by the Mazda’s turbocharged 2.3-litre four-cylinder made the clearly ample 222bhp and 236lb ft developed by the turbo 2.5-litre ‘five’ of the Focus ST – a car which the Mazda shared a platform and numerous components with – seem a bit tragic.

There wasn’t a rival that looked less like a hot hatch, though. It was as if Mazda couldn’t be arsed. The combination of unlikely grunt and stone cold sober aesthetics was enough to give the odd bemused Porsche Boxster driver a smugness check at the lights, but that’s about as far as it went. The acceleration was fun but it didn’t compensate for numb steering, uninvolving handling, a fidgety ride and an overarching sense of dullness. Plenty missing, then, but also something to build on.

Of course, in the intervening three years the hot hatch bar has been nudged significantly north by the Mégane R26.R and the 300bhp Focus RS, but Mazda knows marketing. At £21,500, the updated 3 MPS’s bang-for-buck quotient is already remarkably high, but in a bid to close the deal, every item that would have been on the options list has been ticked on the customer’s behalf, effectively giving the car a niche all to itself, slotting in below the Focus RS but above the likes of the Golf GTI and Focus ST – at least until 266bhp Golf GTI-R arrives towards the end of the year. Fortunately, we don’t have to wait until then to apply a little competitive heat.

All right, the Focus ST Mountune is a modified car, but it is modified by Ford’s affiliate tuner, and the £1096 (plus fitting) ‘260’ conversion, comprising an intercooler, air filter and remap, does nothing to alter the conditions of the standard warranty. More intriguing still, the 256bhp claimed for the upgrade exactly matches the Mazda’s quoted power peak. The torque advantage is with Ford – 295lb ft plays 280 according to the official figures, although as we’ve discovered from a dyno session with our own ST, Mountune’s claims are almost comically conservative.

This shouldn’t be regarded as a conclusive factor, though. You could argue that the ST is almost too comfy and supple for a seriously fast hatch, while in its old incarnation the Mazda felt formidably fast subjectively. This one could feel quicker still, because alongside a visual makeover to give it a more aggressive appearance has come a raft of changes aimed at allowing the MPS to deploy its hefty outputs (unchanged from the old car) with more dynamic flair. Weight has been reduced from 1410kg to 1385kg, the bodyshell is torsionally stiffer by 41 per cent, the springs and dampers are firmer, the anti-roll bars are thicker and the power steering has been revised. As before, electronics limit the torque fed to the front wheels, but this time with the assistance of a torque-sensing limited-slip differential and fractionally taller gearing.

Quick it is. Hitting 60mph in 6.3sec isn’t the MPS’s finest moment (Mazda claims 6.1sec to 62mph), and at this marker it trails the Ford by a half second, but after that it begins to close the gap. This is all the more remarkable when you consider that the tuned ST has the legs of a Focus RS up to 140mph. By 100mph, the deficit is down to just 0.2sec. The same margin separates the two at the end of the standing quarter-mile too, with the Mazda recording a fractionally higher terminal speed.

The Ford’s brakes manage slightly better stopping times and distances, but this isn’t enough to prevent the Mazda getting the better of it on a lap of the Bedford Autodrome’s West Circuit, albeit by just 0.3sec. So far, it’s far from the walkover that might have been expected from looking at the spec sheets.

Away from the track, the Mountune is immediately under pressure again. Put simply, on part throttle the MPS feels livelier and more responsive, despite the torque-limiting regimes in the first two gears. The Ford’s right pedal needs a bigger prod to wake the turbo and then the ensuing kick in the back feels no stronger. That said, the Mazda’s turbo four has a comparatively narrow powerband. Although tractable from low revs, it doesn’t really get going until 2600rpm, while above 5000rpm it begins to feel a little strained and breathless. Between these points the shove is spectacular and the gearing well judged to exploit it, but after a while you begin to feel disappointed with the lack of top-end urge, the enjoyment further eroded by the flat, anodyne engine note and a rather sticky gearchange.

The turbocharged 2.5 that powers the ST is a hugely charismatic (if thirsty) engine in standard guise, with masses of flexibility and a throaty warble when you open the taps. The Mountune upgrade simply gives you more of everything without changing the essential character of the delivery. Compared to the Mazda’s motor, the serious action begins sooner, from below 2000rpm, and lasts longer, only tailing off significantly within 200 revs of the 6500rpm red line. The way the Mountune ST piles on the pace isn’t all that linear – after the initial turbo rush it kicks again at about 4000rpm – but it is properly sustained and quite a thrill, especially with the enhanced soundtrack plying a psychological neck rub. There’s a sweeter gearchange and better brake feel than the Mazda, too, while the Mountune’s greater torque comes into its own at higher speeds in 5th and 6th, accessing overtaking thrust the MPS has no answer to.

But perhaps the factor that defines the real difference between these two most starkly is way they integrate power and chassis. The suddenness of the Mazda’s torque avalanche is felt through the steering, even when travelling in a straight line, which is interesting because not much else is. Although the steering is reasonably direct and precise it’s a poor communicator, with a curiously artificial, springy feel either side of the straight ahead. Throw in a few bumps, ruts and awkward cambers and the feedback vacuum is ruptured by old-school torque steer. It’s a true Achilles heel because the chassis otherwise feels taut, well-tied down and very grippy.

Over the first few miles, the Focus seems almost sloppy by comparison, an impression inflamed by the ridiculously lofty driving position (though the Recaro seat is vastly superior to the Mazda’s rather slippery affair). Its suspension is notably more pliant and its body rolls more in bends. It lacks the snappy, eager demeanour of the MPS. But on Blighty’s seldom peach-smooth blacktop, the ST’s softer, more supple set-up makes a lot of sense. The Focus is also remarkable for the purity and detail of its helm feel, the degree to which it resists corrupting torque effects without a trick diff and the way it flows over the ground, simply ignoring surface imperfections that rattle the Mazda’s chassis. It doesn’t have as much outright grip, but its cornering attitude is more easily modulated with the throttle, adding another dimension to the dynamic mix that, in the end, makes the Focus by far the more engaging and enjoyable steer.

The Mazda’s stacks of standard kit (including Bluetooth and a rather tasty ten-speaker Bose stereo) and sportier driving position might swing the decision for some, and it is a more complete and capable 3 MPS than the original, but the Mountune Focus has the best chassis and one of the all-time great hot-hatch engines. That’ll do for us.