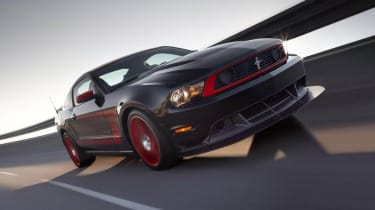 Ford has revealed official pictures and figures of two new Boss Mustangs. They provide a fitting homage to the famous 1969 Boss Mustang which helped to win a huge sales battle with Chevrolet and its competing Camaro. Whilst the Boss never had the same fame or recognition of the Shelby Mustang GT500, it is still a cult hero to many American muscle-car fans and Ford will use this famous name to reignite the war with the new Chevrolet Camaro.  The Mustang Boss 302 and Boss 302 Laguna Seca have increased firepower, coupled with improved agility in the bends, apparently. Ford hopes to provide a super-fast muscle car with the 302, and a road-legal trackday special with the 302 Laguna Seca. Both versions boast an adjusted version of the Mustang GT’s 5-litre V8, providing 434bhp (an increase of 28bhp) and 380lb ft of torque - hardly the archaic power-to-litre ratios we’re used to with American muscle. In both versions, the engine is coupled to a short-shift, six speed gearbox, coupled to a 'race-inspired' clutch that should be a welcome change from the relaxed manual shift in the standard Mustang GT.  To contain the cars will be given stiffer springs, a stronger rear stabiliser and fitted with a much tougher Brembo brake package. The standard 302 is given Pirelli P Zero tyres whilst the Laguna Seca gains R-Compound, racing tyres.  Ford has also adjusted the look of the car with a dipped front spoiler on both versions and an enormous lower grille on the Laguna Seca. The striking looks continue with the orange and black paint job on the standard car and the devilish black and red colours of the Laguna Seca.  Inside, there's a driver-focused instrument panel complete with specific 'Boss' engraved seats in the standard car, while the Laguna Seca version loses its rear seats and is given Recaro sports seats up-front in order to save weight inside.  Both cars will provide quicker lap times than a standard Mustang and although the differences between these two special editions seem minimal, Ford believes the Laguna Seca will hit 60mph a tenth of a second quicker and, on average, will be two seconds a lap quicker. No specific times back up these claims just yet.

Neither comes with independent rear suspension - a feature many critics have been crying out for since this retro-styled Mustang generation was released in 2005.  As usual with modern American sports cars, the Mustang Boss 302s should offer a bargain alternative to European alternatives. The standard Mustang GT is listed at around $32,000 (the equivalent of £20,000), though with no official UK sales, imports weigh in at around £35,000.

The Boss 302 is likely to directly compete with the Chevrolet Camaro SS, from Chevrolet, a rematch of the infamous sales battle of the late sixties, in which Ford sold more than double the number of Camaros with its original Mustang.