Unveiled in Detroit, this is the all-new Mondeo, due in Spring 2013. Full details and pictures 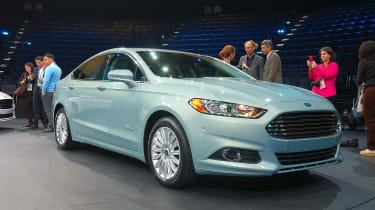 The new Mondeo has arrived. Well almost. This is actually the US-market Fusion, unveiled at the Detroit Motor Show. Ford's all-new saloon is packed full of cutting-edge technology, advanced hybrid drivetrains and a new style that Ford hopes will propel them back to the front of this highly competitive market.

In line with Ford's new 'One Car' policy, the Fusion as we see here, will form the basis for Mondeo-sized all over the world. The European incarnation will differ slightly from the Fusion (both can be seen in the gallery), but the idea behind 'One Car' is to reduce development costs by developing a single platform for multiple markets, including Europe, North America, Asia and other emerging markets.

Ford is pushing the Fusion as a hyper-economical mid-sized saloon, and it's certainly not short on tech. There are various powertrains available, including the 168bhp 1.6- and 234bhp 2.0-litre EcoBoost engines, a 2.0-litre hybrid with the all new 'Atkinson' Cycle engine (Previewed in last year's Evos Concept), and what Ford hopes will be a world-beating eco car, the Fusion Energi plug-in hybrid. Ford has made some bold claims with the Energi, and they reckon it is the most efficient mid-size saloon in the world, outclassing the Chevy Volt and Toyota's plug-in Prius.

With the emphasis on high-tech fuel-saving hybrid technology, it would be easy to think Ford had forgotten about the dynamics, but the company insists that the MacPherson strut front and multilink rear suspension makes this a real driver's car, and although there are currently no plans for a hot Mondeo, the 234bhp EcoBoost should be quick enough to keep you entertained.

The Fusion will go on sale this year in North America, but Europeans won't see the new Mondeo until March 2013.